The Making of "Drinking Problem"

Some time after I created my image Wine is a Primary Industry, I set out to create a new image, also exploring the theme of liquid in wine glasses, but this time with something more.

The result was Drinking Problem. 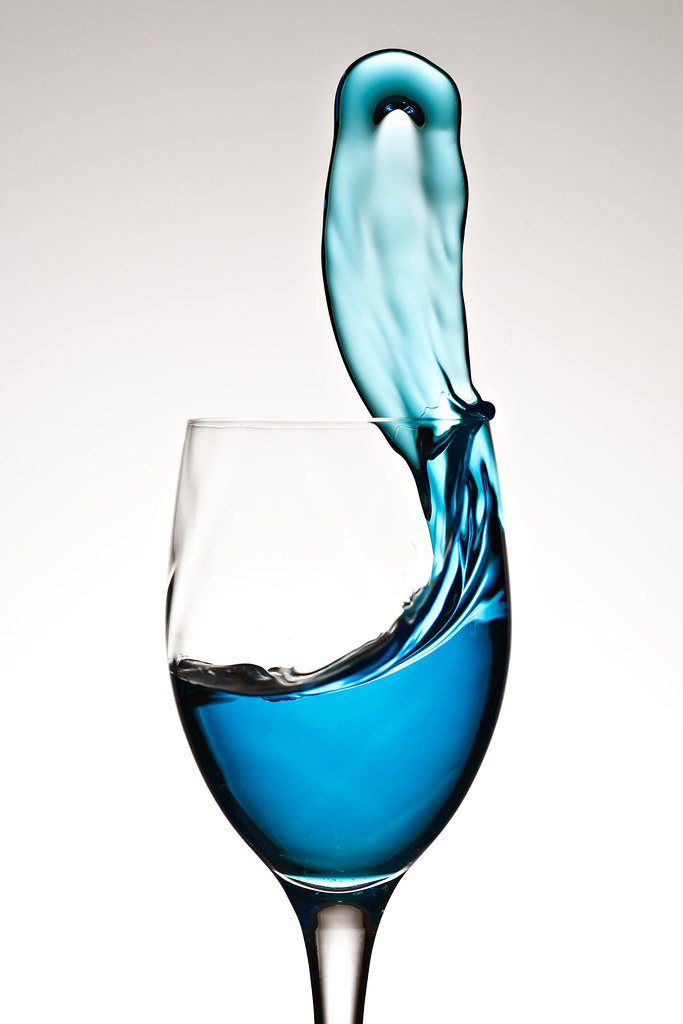 This image took me over three hours to create, as a fair bit of setup went into it.

The splash was generated by moving a platform, to which the wine glass was affixed, across the camera's path, and abruptly stopping it precisely within the lens's field of view so that the momentum would cause the liquid to splash up and out of the glass.

I built a dolly and platform using wheels and rails so that I could easily and consistently slide the platform along the same horizontal plane.  I had pre-focused the lens (I used a 135mm lens for this) and wanted the glass to always end up in the same place, and be in focus.

I placed a heavy object at the end of the dolly to stop the platform dead in its tracks.

I used Blu-Tak and copious quantities of packing tape to attach the base of the glass to the platform, as I had broken another glass earlier in the night during 'dress rehearsal'.  I had practiced slamming the platform into the weight to make sure I would get a splash, and see what sort of splash I would get (each splash is unique and can never be repeated).

Unfortunately the Blu-Tak I had used in the rehearsal was, of itself, not enough to keep the glass affixed, and during one run it lost its grip and fell into the weight, breaking in the process.

As for the background and lighting, I used the same staging I built to create Wine is a Primary Industry previously.  I pointed a strobe at a white backdrop, dialled in the right amount of power (1/32nd at 24mm zoom), and using a radio trigger I fired it from the camera at the moment of exposure.

On the camera I used a remote shutter release so that I could push the platform with one hand, and fire the camera with the other hand at the moment the platform struck the weight.  I was not looking through the viewfinder when shooting; I physically could not do so, and did not need actually to use the viewfinder, as I knew exactly where the glass would be at the critical time.

There was a surprisingly little amount of liquid spillage as a result of doing this (I had counted on a lot more), but I was prepared, and placed my strobe and radio trigger in zip-lock bags to protect them from the liquid.

So, there you have it.