Our final day in the Mara had arrived, and we had one morning game drive before we would need to depart Elephant Pepper Camp and the fantastic people, animals, places and experiences that had made up the previous week.

The day was quite subdued, and there was that ever-persistent feeling we had experienced before on our final day in a magical part of Africa: the feeling that we had little time left, and that the peak of our adventure had well and truly passed.

We would be flying back to Nairobi later that day, and the pace of life was going to change.

Like every other day, we started early, heading out into the Mara plains in darkness.  We did not stop anywhere for a landscape shoot on this particular morning, as the sky was not promising, and we had achieved some very pleasing images on previous mornings.

Francis took us in a northerly direction, across the C13 and to the region half-way between camp and the Mara River.

We found a solitary River Pride lioness in the scrub.  She was resting in a clump of bushes, and while I had my lens trained on her, the photography was not looking likely to eventuate, and as it turned out, I did not fire a single shot.

The lioness did not seem to be in the mood for modelling, and she stayed in the thick clump of bushes, offering us only fleeting sightings as we circled around the bushes to gain a better view.

Usually when one sees a solitary lioness, it indicates the presence of cubs that are being kept away from the pride until they are older; but we did not see any signs of other lions in the area, although almost certainly other River Pride members would have been not too far away.

It is always a pleasure to see lions in the wild, and we had lion sightings on every day we spent in the Mara, except perhaps for day six.  I can find no reference to lion sightings in my records for that day, so if we did see one, it was fleeting.

We had seen big cats on every single day, however, and being cat fans, that was enormously pleasing.

We soon left the River Pride lioness, and headed back east to the spot along a Mara River tributary at which we had witnessed mating leopards on the previous evening.  We wanted to see if we could find them again, as mating leopards can spend time together in the same general area for several days.  There was a chance we would find them.

Unfortunately, we did not.  If they were in the immediate area, they were well hidden; or perhaps they had moved further north or south along the tributary.  We certainly did not see them, and our last sighting was on the previous night when they had crossed the water into thicker scrub.

While Francis was slowly navigating around the area in search for the leopards, we saw something we did not expect.

To the left of the vehicle, just over eight metres away, a dik-dik emerged from the scrub.

The dik-dik is a very small, rapidly-moving antelope.  We had not seen one before, so naturally we readied ourselves for some photography.

I was fortunate enough to land one image of the dik-dik as it paused momentarily under the cover of the thicket. 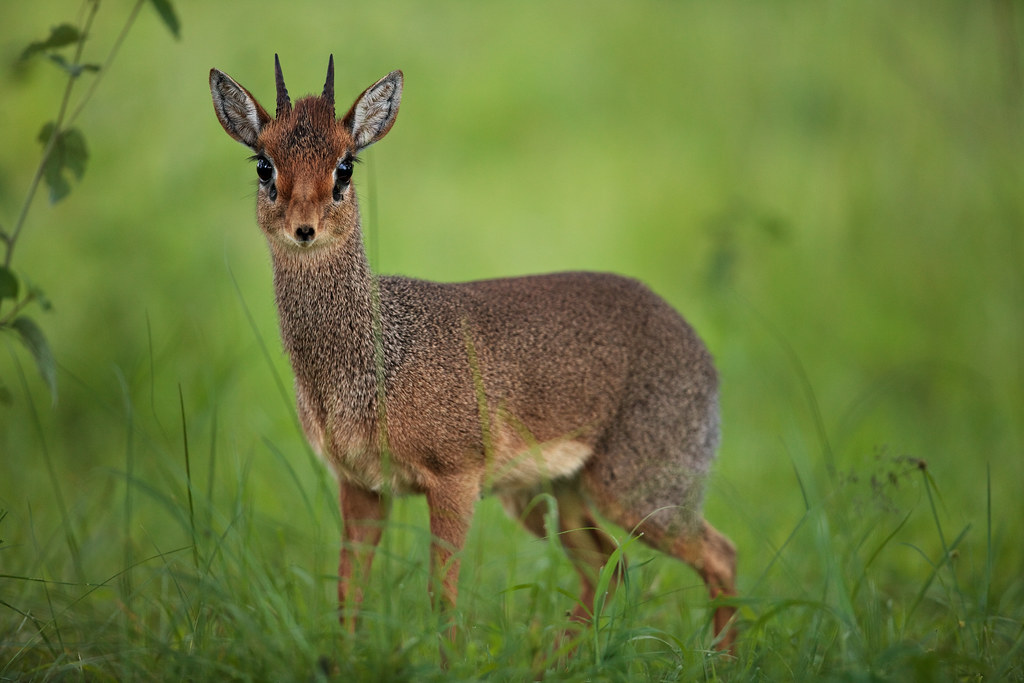 The dik-dik stayed for perhaps a minute before darting off into the distance.

It was an unexpected but pleasant sighting, and I landed just the one pleasing image of the antelope looking straight at me.

Once the dik-dik had exited the scene, we soon did the same, and crossed the river, heading in an easterly direction.

Still in the same general area where we had seen the two leopards the night before, a lone hyena emerged from the distance, making his way closer to us in the fairly open grasses.

Hyenas and leopards are eternal enemies, and a leopard will flee if the presence of a hyena is detected.  Hyenas are certainly known for stealing leopard kills, and in fact, stealing anything they find; but more critically, hyenas will kill leopard cubs.

If the leopards were anywhere nearby, we had little chance of seeing them, particularly due to the presence of the hyena.  We did not capture any images of the hyena, but it was pleasant enough just to see him scouting around during the quiet part of the morning, with us being the only other evidence of life in the immediate area.

Soon enough, we headed north-west, to a spot along the Mara River trib, north of where we had seen the leopards.

Within a short time we had found a pod of hippos wallowing in the muddy waters.

We were very close, and it was the closest distance to a hippo at which we had ever been.  We had seen hippos in Mpumalanga snd KwaZulu-Natal in South Africa, but they were much further away, and more submerged than the animals we had just encountered.

It seemed that the hippos were somewhat uncomfortable by our presence, as there was grunting, sizing up and restlessness apparent.

I captured an image of a large hippo in his element. 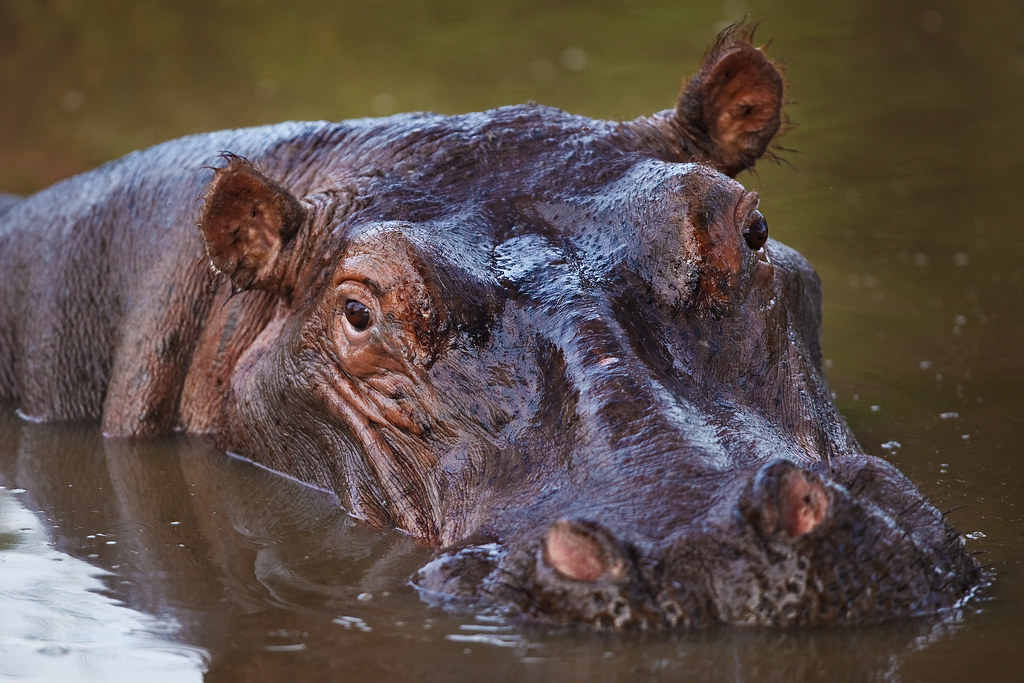 Master of My Domain

This hippo was definitely the master of his domain.

During the time we spent with the hippos, the warmth of the early morning light descended upon the landscape, and with the sun behind us on the eastern bank of the trib, the nice pink and brown colours of the hippos stood out.

As we slowly moved around, the hippos were becoming agitated, and it looked like there was going to be a fight for dominance between two of the larger males.  The mood was icy, and we were expecting and hoping to see something exciting; but alas, it never eventuated, and the hippos calmed down somewhat.

We continued to watch and photograph, and eventually, one of the hippos exited the water and began grazing on the western side of the trib.  It was our first time seeing a hippo out of water. 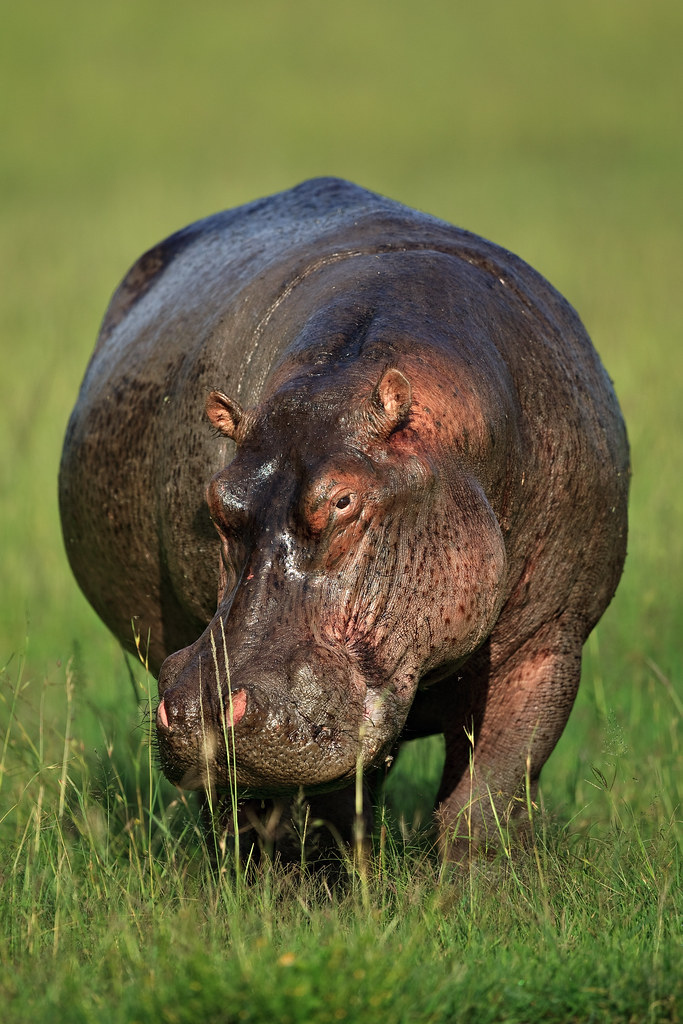 He certainly was impressive, and it was nice to see him out in the open, grazing on the short grasses 28 metres away from us.

The light became warmer as we watched the hippos, so towards the end of our time with them, I captured a few images of the richly-coloured animals semi-submerged in the muddy water. 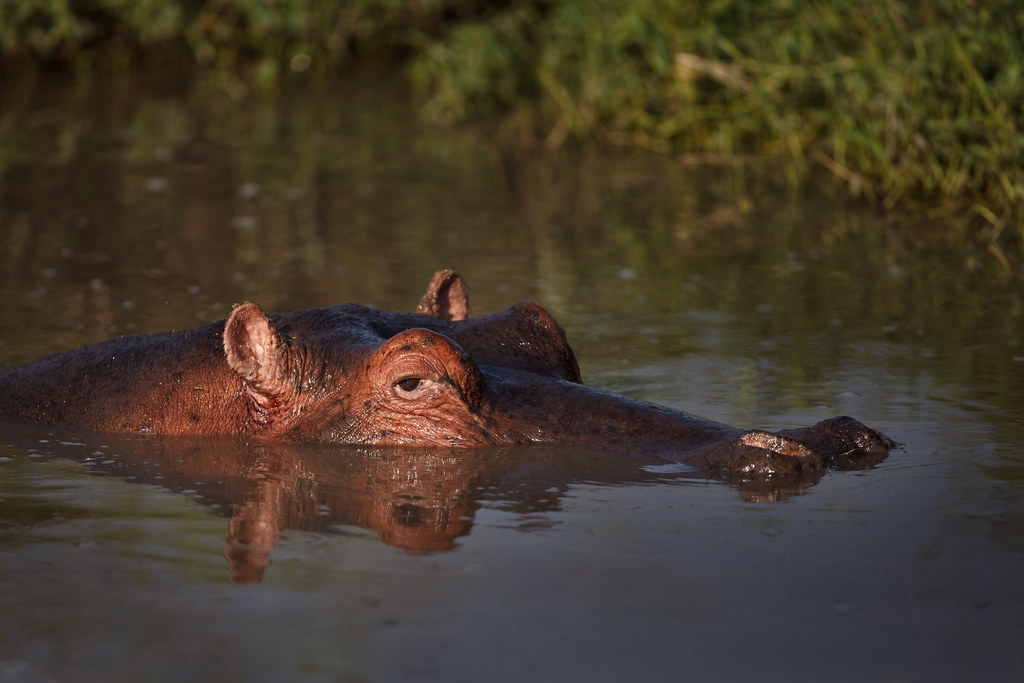 This hippo was definitely keeping an eye on us!

Soon enough, we headed back to camp.

We headed south, back to camp without stopping for any further images.

Back at camp, we had breakfast, and began the unpleasantness of packing and getting ready to depart.

We still had a few hours before our flight, so we spent time at camp in the lounge.  We had met a few other guests over the previous few days: a mother and daughter from Florida, who were travelling in different parts of Kenya and Tanzania, staying only for a few days at different lodges; and a Hong Kong Chinese couple, for whom this was their first trip to Africa.

Both pairs of guests were also due to depart that day, so we said our goodbyes and set about the uncomfortable business of lingering, knowing that we had little time and that there was little we could do but wait until it was time to head to the airstrip.

The mood at that stage was somewhat sombre.

Eventually, it was our time to leave.  We were the last to leave, and this was not the first time we had experienced the loneliness and flat, empty feeling as everything and everyone around us had departed.

Time was running short, and we had to depart, as there was only one flight out of the Mara, and if we missed it, well, we would have to stay another night.  What a shame that would be!

We had a few group photos with Mario and Francis, Patrick and Sophie (the resident managers of Elephant Pepper Camp) and the other staff.  Then it was time to climb into the 4WD for the last time, and head north to Mara Shikar Airstrip, which was very close to where we had been with the hippos earlier that morning.

When we arrived at the airstrip, there were no signs of life, and the plane was not on the ground, or anywhere in the air nearby.  We started to become concerned, as we were the only people there.

Francis got on the radio, and it turned out that our flight was leaving from Mara North Airstrip, which is only a few hundred metres west, perpendicular to Mara Shikar; but it takes a good five to eight minutes to get there.

We scrambled back into the 4WD and Francis gunned it, as we had only a few minutes to head the long way around in order to get to a place that was a few hundred metres due west of where we had just been.

Francis drove very quickly, and I felt like he was going at 80-90km/h; but I looked at the speedometer, and we were travelling at 40km/h.  In the Mara, that is fast.  We were so used to edging our way around at a very slow speed — probably barely more than 10km/h most of the time — that 40km/h felt like motorway speeds.

A few minutes later, we arrived at Mara North Airstrip and boarded the plane just in time.  Shortly thereafter, we were in the air, departing a place we did not want to depart.  Barely a word was spoken on the 45-minute flight, as we looked down over the plains, still emotionally immersed in what had been a magical week.

Mario had originally planned to stay overnight in Nairobi, but during the morning he had been in contact back home, and he needed to return to Spain to sort out some paperwork; so he changed his flights, and rather than spending a night at the Boma Hotel with us and travelling around Karen and Langata with us on the following day, he flew out of Nairobi that night.

We had one more day in Kenya the next day, but our time in the Mara had concluded.

It had been a magical trip, and here and now, writing about it over three months after, I still long to be there, and cannot get the place out of my head.

It feels so familiar now, and writing about these adventures, though a long process, has kept the memories very much alive in both of our minds.  Watching the BBC series Big Cat Diary, which was shot in the Mara, and which made Leopard Gorge famous, also keeps the place fresh and familiar.

Life is so fast-paced, that despite being in a completely different environment, experiencing things that are far from routine, it really did not take long before the pervasive strength and persistence of real life dragged me, kicking and screaming, from a world in which I would rather be; so keeping the Mara alive and fresh in my mind is not only desirable, but altogether necessary.

From that trip, I still have more images, and a lot of videos, to process; so there will be more from our trip to publish; but just as our trip to the Maasai Mara concluded, so too has this series of articles.

I hope readers have enjoyed hearing about our time in the Mara, and that those who have not been there before will be inspired to go there.

It really is a special place.