Late in 2017, we headed to Brisbane and south-east Queensland for the first time since 2013.

It was high time to visit Dave and Lea, and engage in some photography, tomfoolery and shiraz consumption.

On our first full day, we decided to head south-west to Queen Mary Falls, as there had been some recent rain in the Gold Coast area, and there was predicted cloud cover, which made waterfall photography ideal.

Our first stop was at Daggs Falls, where an observation platform provided a great view.  Unfortunately, the platform was very prone to vibrations, which made shooting long exposures with a 200mm lens and ten-stop ND filter somewhat impossible.

We drove up the road for a few minutes and got to Queen Mary Falls, which had a much more stable observation platform.  This time, I used my 14mm lens to capture the vast expanse of the scenery and the high view. 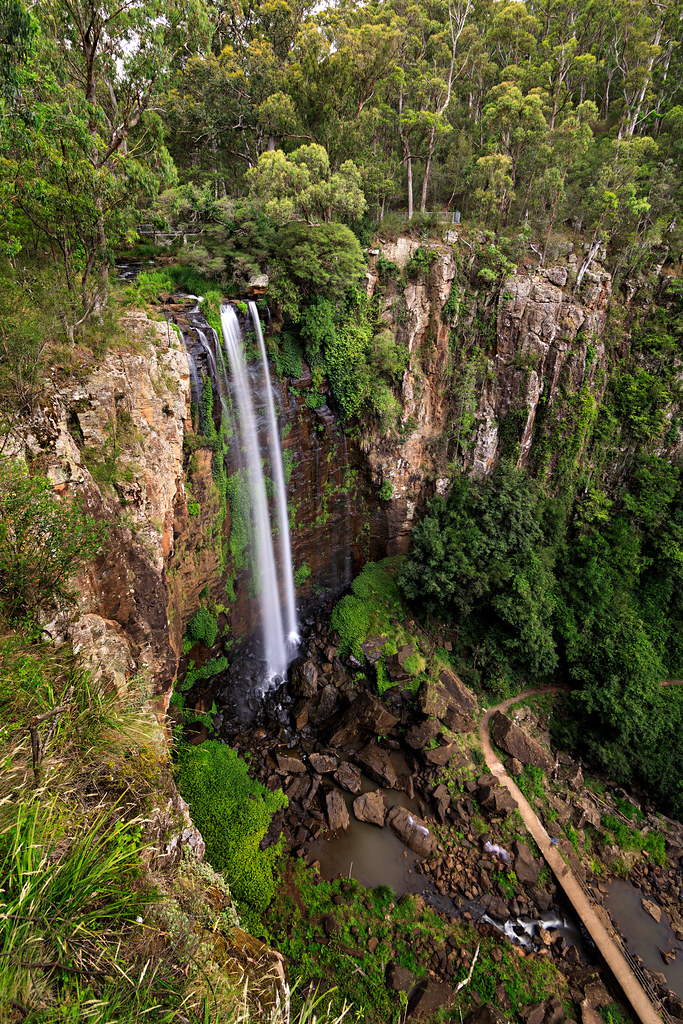 After we had finished shooting, we decided it was time for a late lunch.  Heading north-east for around five minutes, we happened across the Spring Creek Mountain Café, which offers a very pleasant view of the Scenic Rim.

While waiting for our lunch at an outside table, I took advantage of the light and cloud conditions over the valley, and captured this view. 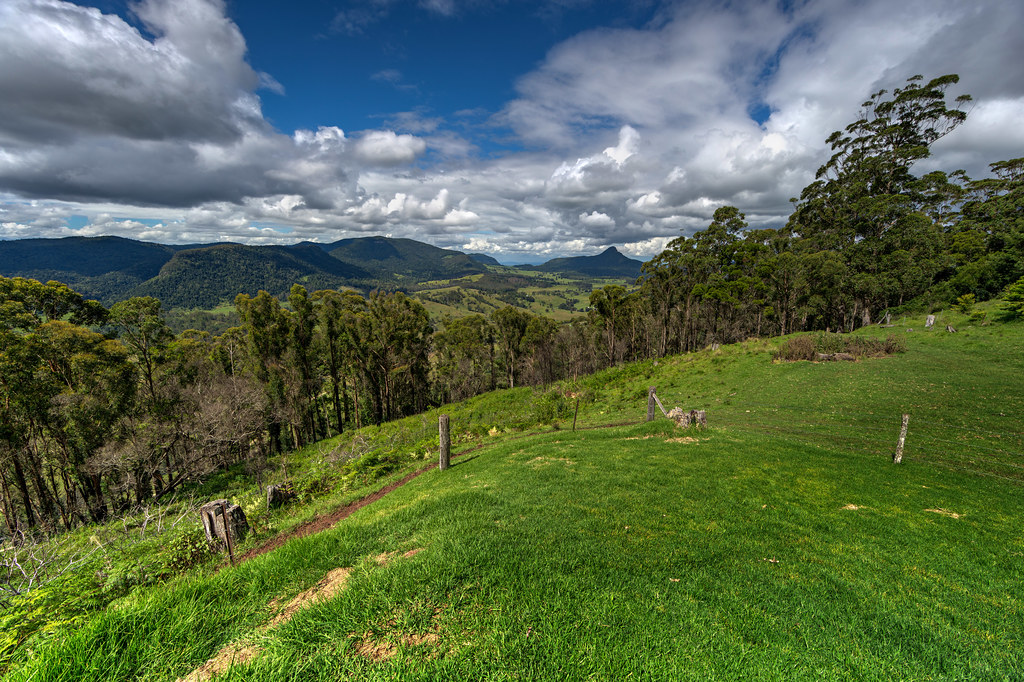 The plan for the same day was to visit Brisbane's iconic Story Bridge for a twilight shoot.  The last time I photographed the Story Bridge was in 2008, and it was time for a new look at it, applying the experience and gear I have acquired since I last shot it. 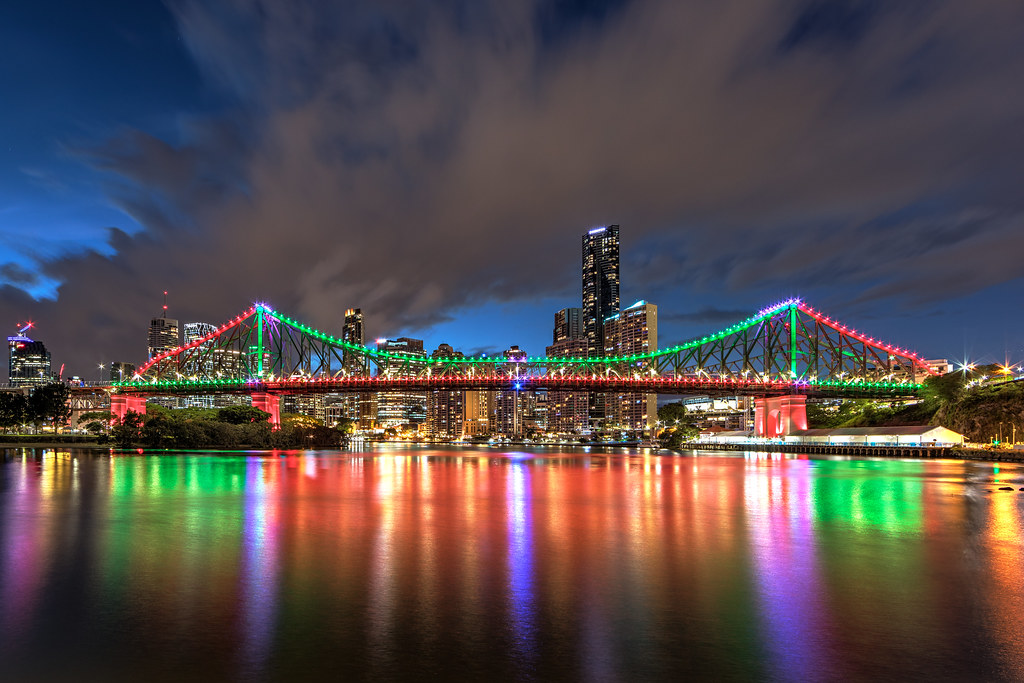 After our shoot concluded, we walked to New Farm and stopped in an Italian restaurant for a late dinner before making the drive north-west to Cedar Creek.

The next day, the plan was to head out for an afternoon landscape shoot during golden hour.  This time, Dave and I headed out on our own.

We decided, given all the driving the day before, to remain in the local vicinity, and we threw around a few ideas.  We figured we would look for a view of the mountains in the area such that the sun would be behind us.

Driving around, we ended up at Mount Pleasant, but the scenes we visited just were not right, so we continued on, and this time headed up Mount Mee.

While driving north along Mount Mee Road, Dave spotted an interesting tree on the right at the junction with Sellin Road.

We stopped and headed over to the eastern side of the road to photograph the tree, which also had some grazing cows lingering nearby.

The light was warm, as it was quite late in the afternoon, but not quite warm enough for what we had in mind.  However, the light was still decent enough, so we snapped away as the cows grazed.

Here is what I captured: 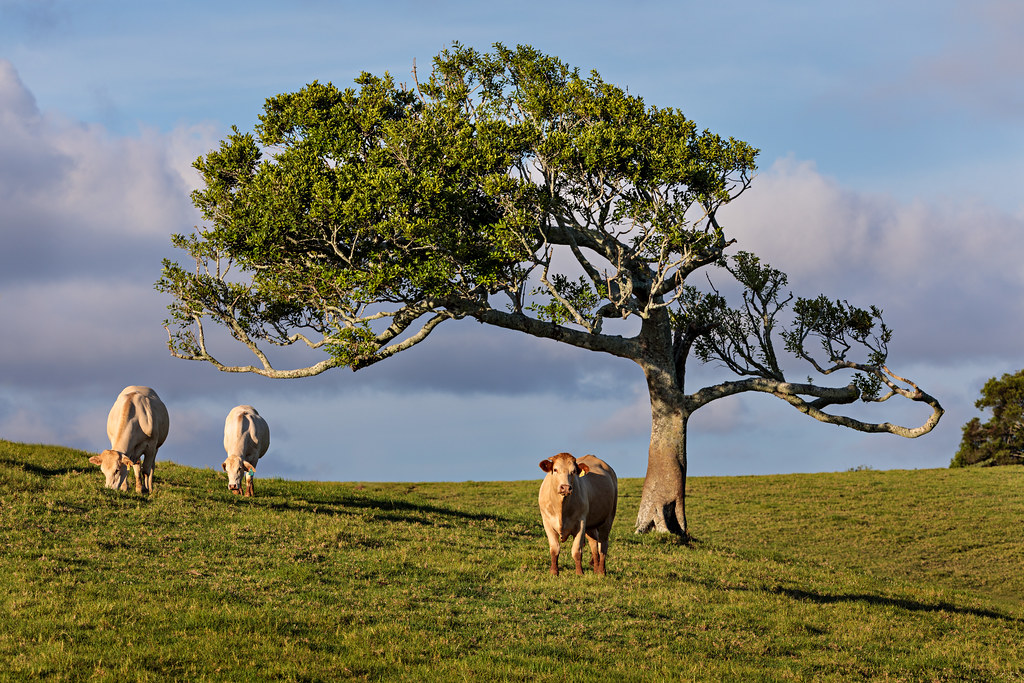 For this image, and the image I was to shoot later in the day, I used my Canon EF 200mm f/2L IS USM lens.  Now, this lens was not one I bought to shoot landscapes, and I rarely ever use a telephoto lens for landscapes, much preferring the wide vista provided by an ultra-wide lens; however, from where we were standing, the 200mm focal length was just right, and provided a nice amount of compression.

After we had finished shooting at this spot, we headed west along Sellin Road, and spotted a lone tree we had photographed at dawn back in 2010.  To our surprise, there was now a large house now on the property, close to Sellin Road.  We could still see the tree further up the paddock in the distance.

Here are the stand-out images I captured of the ' Mount Mee Tree' in 2010: We continued westward, and found some lovely side-lighting htting the lush green grasses down the ravine, but compositionally, there was not much on offer; so, we turned around and headed east.

I was beginning to think that we may not find much at all, and I pointed out that one really needs to scout and plan a location, which, we clearly had not done.

However, heading further east to where we had photographed the cows, I spotted a lovely, large tree down a valley to our left.  After driving past it, we swung back around and pulled up, with this location to be our final location for the day, in which we would photograph this beautiful tree in the rich and warm golden hour light which would greet us a little later.

I quickly found my composition, again using my Canon EF 200mm f/2L IS USM lens.  The view I found from the spot where I perched myself also contained some lush, long green grasses in the foreground, which I purposefully kept in the frame.  I liked the extra interest, as well as the framing device, it provided.

From then, it was a waiting game.

Once the light became even warmer, we snapped away.  Dave was capturing all sorts of images of different subjects in the area, from varying positions.  I remain focused on the tree.  That was my image, and I was not interested in anything else.

After waiting for the right light, here is the image I shot: 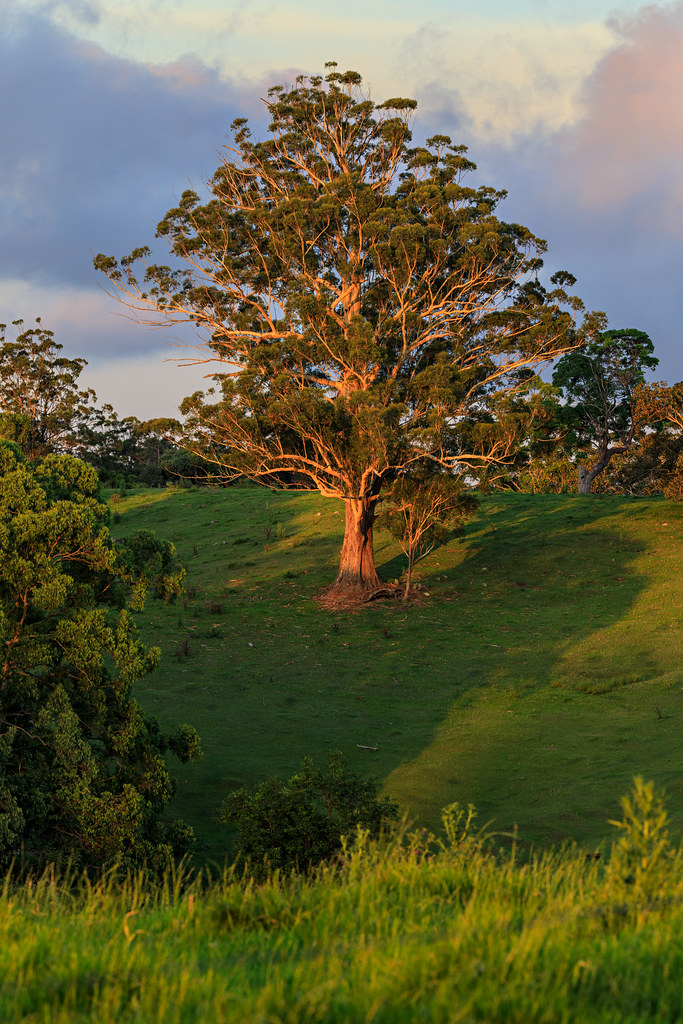 After the lovely light had disappeared, we headed back to Samford to collect some cows (of the non-grazing variety) and fermented grape juice for dinner at the house.

Thus, my photography for this trip was completed.

We lined them up for a 'family portrait', and Dave captured an image of the two lenses side-by-side.  Later during the visit, we also staged a semi-scientific shoot, with a foam rubber dinosaur as the subject.  We photographed the dinosaur with both lenses, using the widest apertures available on both, as well as the widest aperture common to both.

Upon inspecting the resulting images, there is not a great deal of difference in sharpness between the two lenses.  Both deliver outstanding results.

All in all, it was a fun trip, and while photographically the conditions were not super exciting, I did manage to capture a few pleasing images along the way.