Mount Wilson, in the Blue Mountains to the west of Sydney, is a wonderful location for landscape photography.  Its specific appeal is the rich colours of the leaves during autumn, and many photographers venture to Mount Wilson to capture these colours.

The quiet little mountain township had been on my never-ending list of photography locations/subjects, and it was a place which required autumn weather for the kind of images I wanted to capture.

I had been following and participating in an online discussion about locations in Sydney at which to photograph the autumn colours, and naturally locations such as Mount Wilson and other parts of the Blue Mountains entered the discussion.

There was a specific image I wanted to create.

A few years ago on Instagram, I had seen a fantastic image of a stone staircase in Breenhold Gardens, captured by landscape photographer Kalan Robb, whom I follow on various sites.  The image was rich with colour and atmosphere, and I wanted to create that kind of image.

Through following the online discussion, in which a few people who lived in the mountains (or had visited) reported on conditions, I had a good idea about when would be a good time to visit.

In the autumn of 2018, the cool change came quite late, as there had been unusually warm temperatures.  Usually mid-to-late April is a good time to capture the autumn colours, but the temperatures did not drop until early-to-mid May, resulting in late development of the colour of the leaves.

We happened to be going away to the Blue Mountains on the weekend of 12-13 May, 2018, and as the time for photographing Mount Wilson's autumn colours is very limited, a visit to this location was a must.

We departed early in the morning to get to Mount Wilson for two reasons: to capture the location in good light; and to avoid the crowds of day-trippers who would descend upon the area as the morning wore on.

We entered Breenhold Gardens, and wandered around.  I photographed a few locations, with one of my earlier images capturing Socrates Garden. 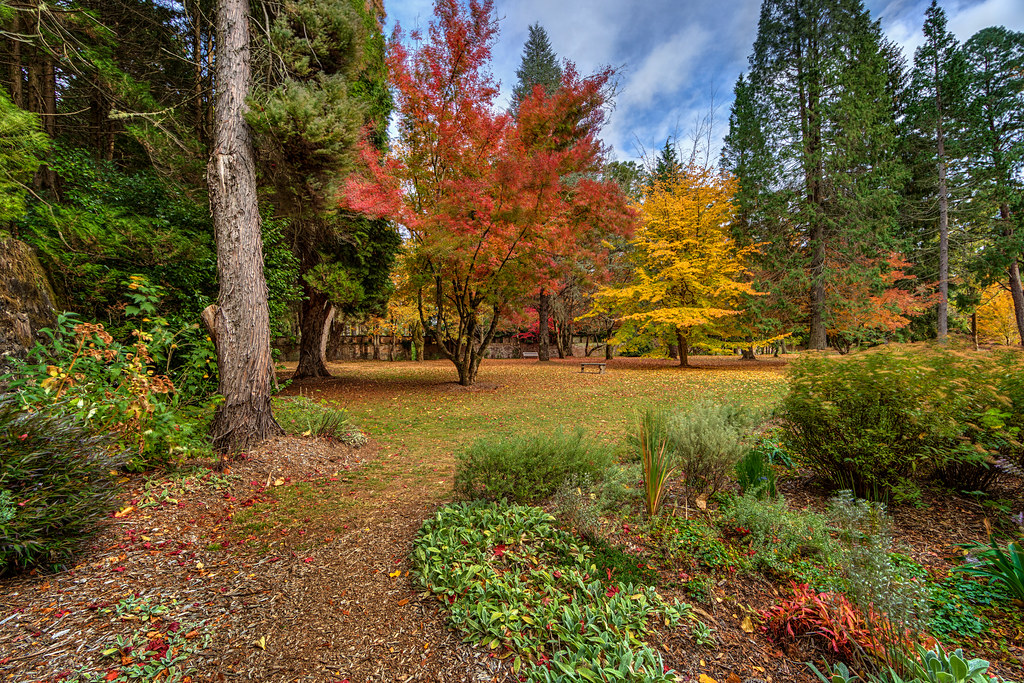 Socrates Garden is a tranquil enclosure within Breenhold Gardens.

High on my agenda was a visit to Laburnum Steps, which was the feature I specifically wanted to photograph.  We procured a map and made our way to the steps.

Armed with my tripod, camera and 14mm lens, I went about my particular routine of setting up my gear and composition. 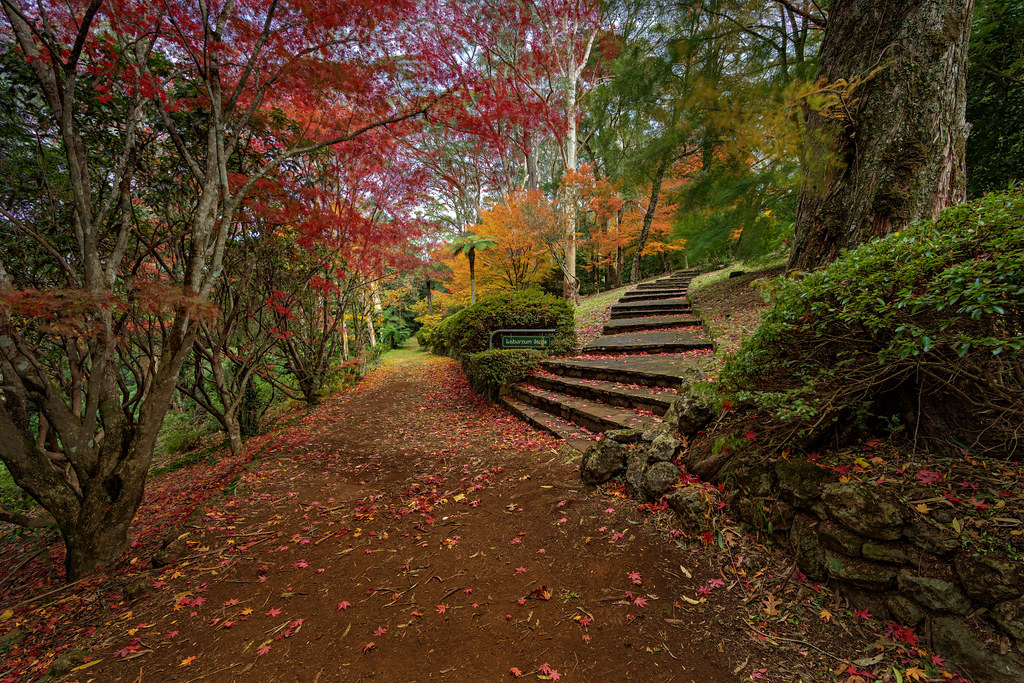 I was fortunate to see some stunning autumnal colours, but based on other images I have seen, it did not look like it had reached the intensity exhibited during colder years.

The rich red colour of the Japanese maples was present, and there were leaves scattered around on the steps and the dirt path perpendicular to the steps.

In the distance was a mix of greens, oranges and yellows, so it was a smörgåsbord of colour.

I was quite happy with this image, but I felt that I had not captured this location at its best.

In an earlier shot, I moved closer to the steps and shot an image in portrait orientation. Here is the result: 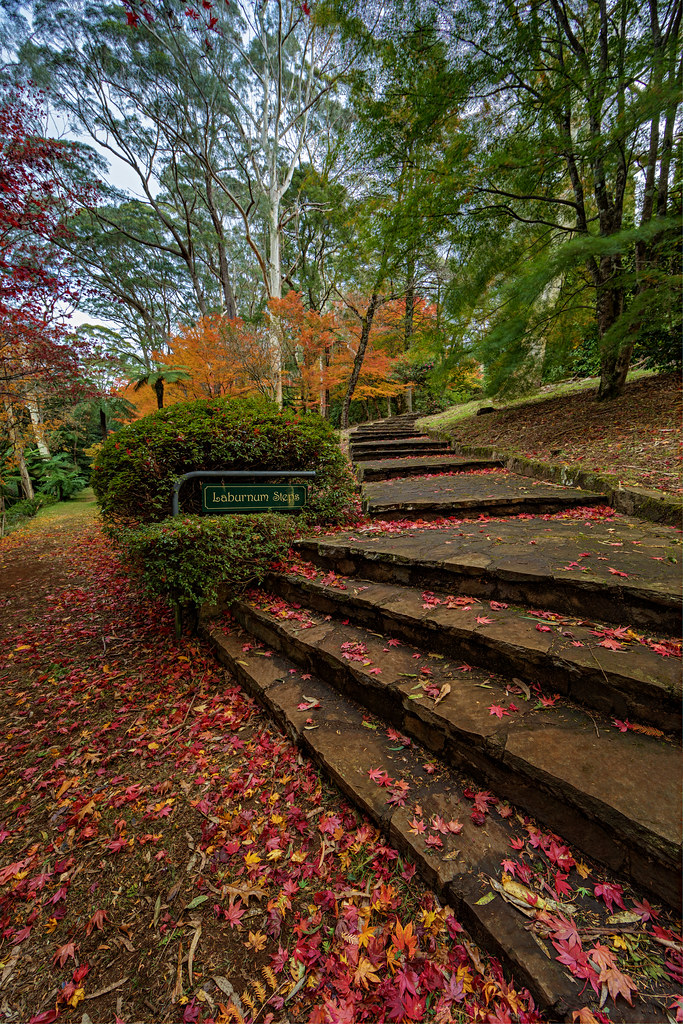 Here, the orange and red colours of the the fallen Japanese maple leaves can be seen more prominently, and the viewer's eye is led up the winding staircase into the distance.

Incidentally, I have never actually climbed that staircase, or even set foot on it!

From that brief visit, I came away with at least two pleasing images, plus a number of other images I captured at different locations within Breenhold Gardens.  I should re-visit those images and see if there is something worth publishing.

However, my work was not complete.  I did not feel that the autumnal weather conditions had peaked, and with Kalan's image in my mind, I knew I had to return.

On our way out of Breenhold Gardens, we met one of the managers of the gardens, who lives on site, and often stands at the entrance, meeting and greeting visitors.

I spoke with her for a few minutes, telling her of my interest in the colours, and of being there early in the morning.  She said that she could allow me earlier access.  Normally the opening time is 10am, which is too late for moody photography, and too late if peace and quiet is what one seeks.

She told me that the following weekend would be the best time to visit, as the conditions would very soon deteriorate.  Heeding her advice, I contacted her later that weekend and made arrangements to gain access at dawn.

So, on the following weekend, we headed back to Breenhold Gardens, even earlier, arriving just before dawn.  I wanted to be ready to capture Laburnum Steps in great conditions.

Through the darkness, we took the short walk to the steps, where I again went through my fussy ritual of setting up my composition and waiting for the right light.

This time, I opted to shoot with my 24mm lens.  I felt that 14mm was too wide to feature the steps prominently enough, and I wanted a different image of the same subject.

On this morning, I found that the light was flatter and more subdued.  We were there earlier, and due to the mountainous location, the warm morning light falls upon the scene much later, by which time it is too late for serious photography, as all of the day-trippers have crowded the scene.

We were there for the better part of an hour, waiting for the light to change.  I realised that the sun would not hit the steps and foliage until much later, and continued shooting.

Here is one of the earlier images I captured during that morning: 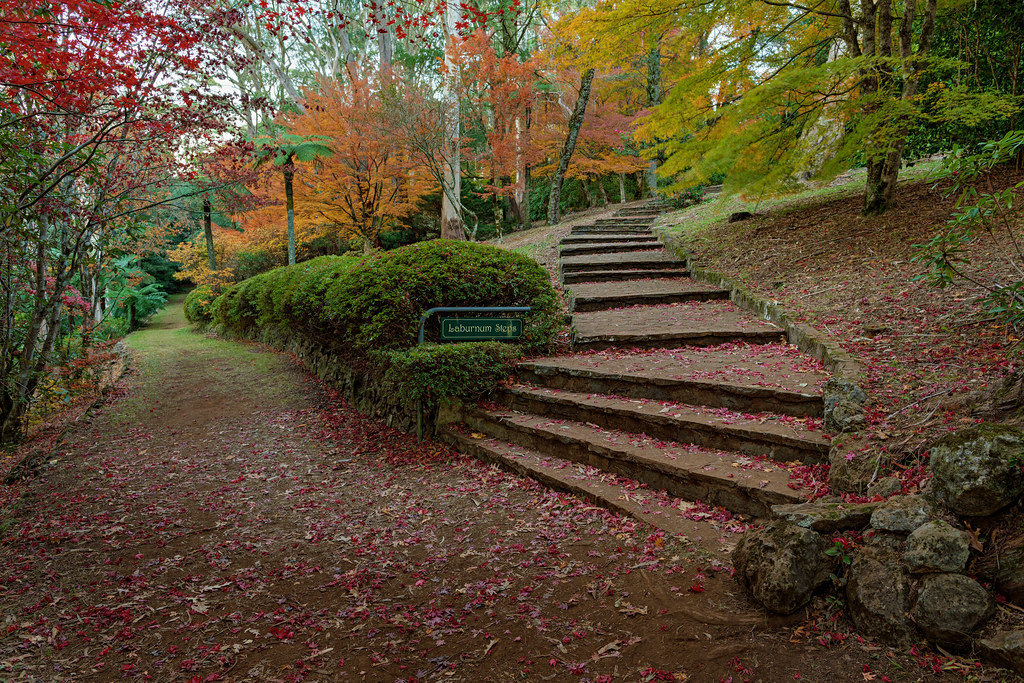 The flatter nature of the light can be seen in this image.  This image was captured at 6:45am, whereas my image from the previous weekend had been captured at 9:37am - nearly three hours later.

What was also noticeable is that the colours had not dramatically intensified, and the number of leaves on the steps and surrounding areas had not really increased.

I was somewhat disappointed that the conditions had not improved much within a week.

As was the case during the previous visit, I also shot a vertical composition. 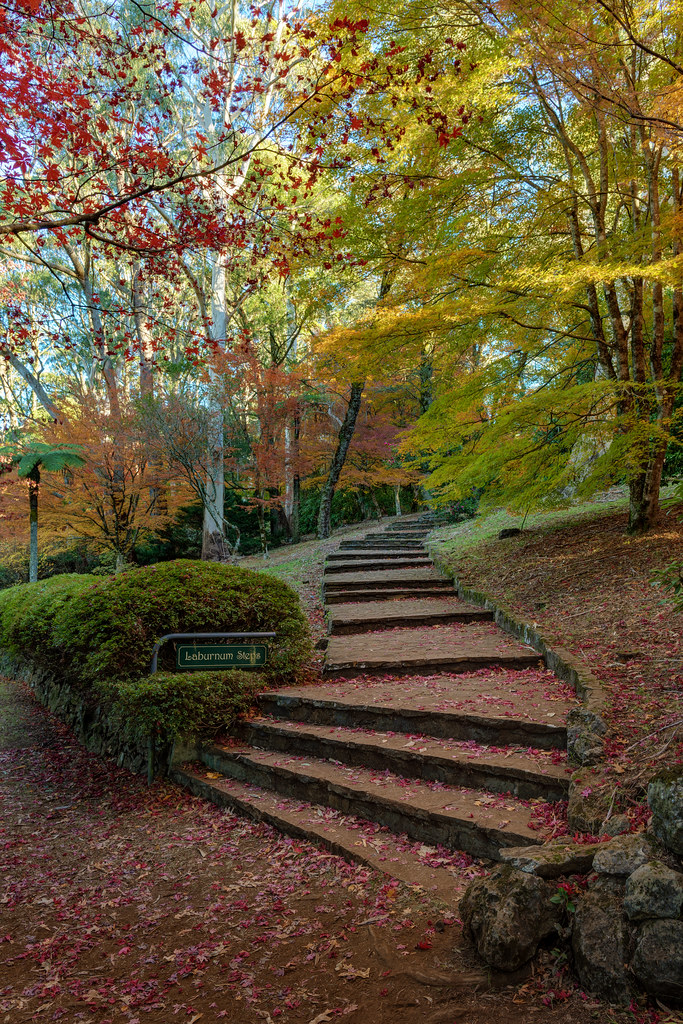 I shot a few more compositions of Laburnum Steps before I decided to wrap up and head off to find some other locations in Mount Wilson.

Only a few metres away from Laburnum Steps is another set of steps called Acer Steps. In fact, descending this staircase is one of three ways of accessing Laburnum Steps, and it was the route we took on both visits.

Heading back up Acer Steps, I noticed that the backlighting of the scene worked very well with the Japanese maple whose canopy shelters the steps.  The light and the intense colour instantly attracted me, so I scrambled to set up for another shot.

I struggled to compose (which is not a problem I usually have), and moved the tripod a matter of inches here and there (and sometimes even greater distances) to try to get the best composition from a tricky scene.  I was trying to avoid some distracting elements being positioned too close to the edges, while also prominently featuring the backlit red leaves, and avoiding any direct light from the still-rising sun.

After much fussing around and making of micro-adjustments, here is the image I eventually captured: 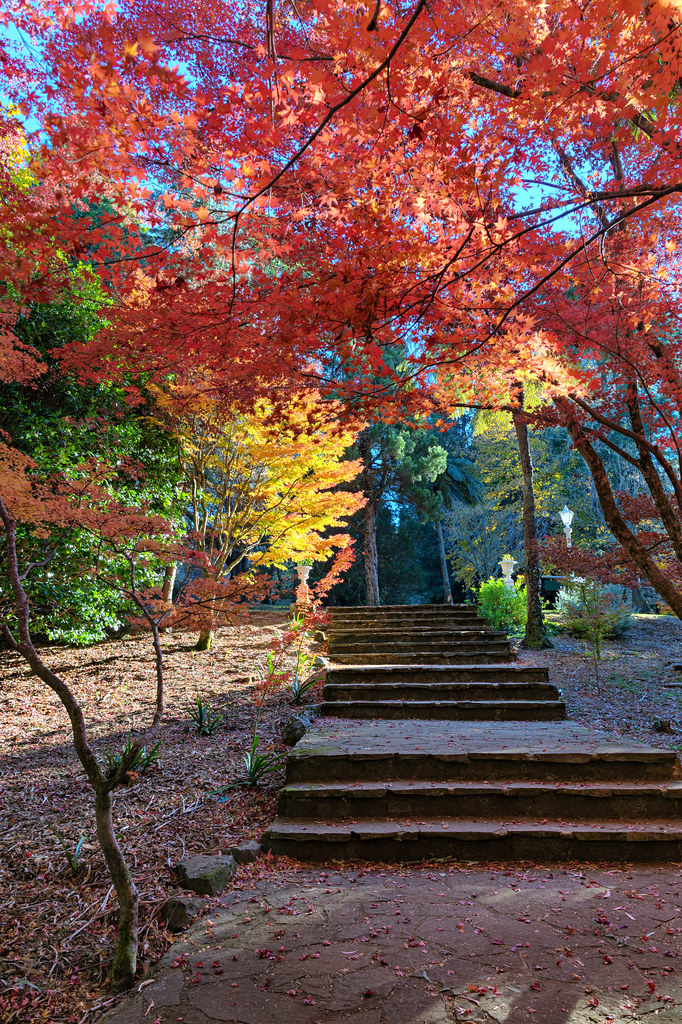 After this shot, we headed to Church Lane, where I found this charming entrance to a property containing the Koonawarra guest house, located in Dennarque Estate. 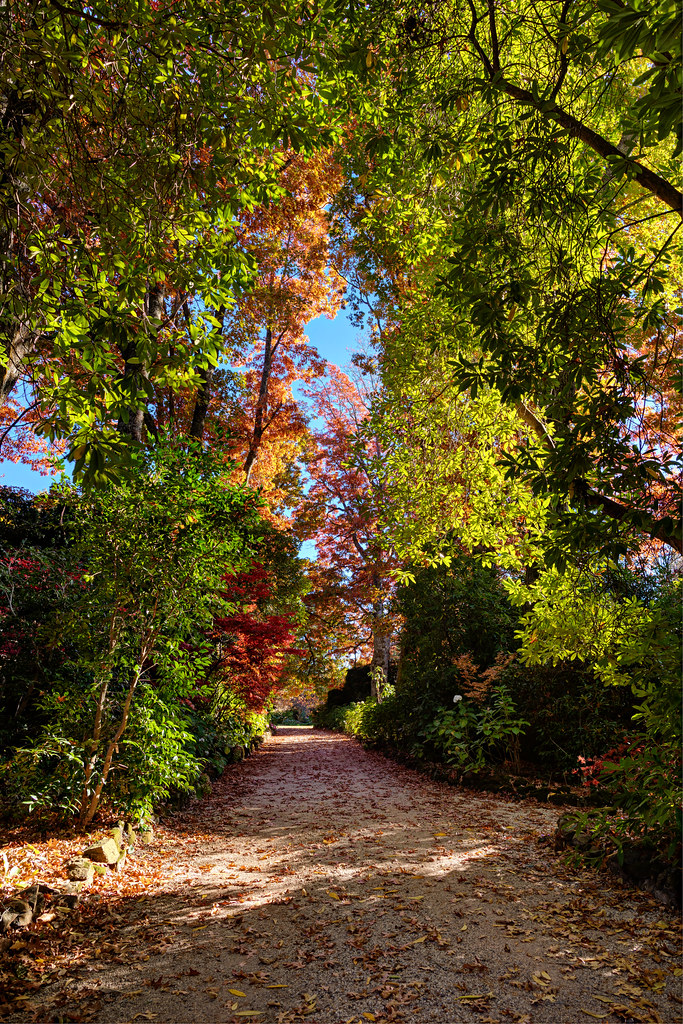 The rich reds and oranges in the distant trees looked radiant in the warmth of the morning light.

Church Lane itself can look fantastic in autumn, but it needs the right conditions, and there is the problem of power poles, power lines and parked cars polluting an otherwise quaint scene.

After shooting this image, we went looking for the chestnut picking farms, for which we had seen signs the week before.  Unfortunately there was no sign of any chestnut picking opportunities in the area, so I found one more spot to photograph before we headed home.

Along Waterfall Road, there are some picnic tables, and I focused my lens on one of them while a group of tourists/photographers engaged in some frivolity and portraiture not far from where I was shooting. 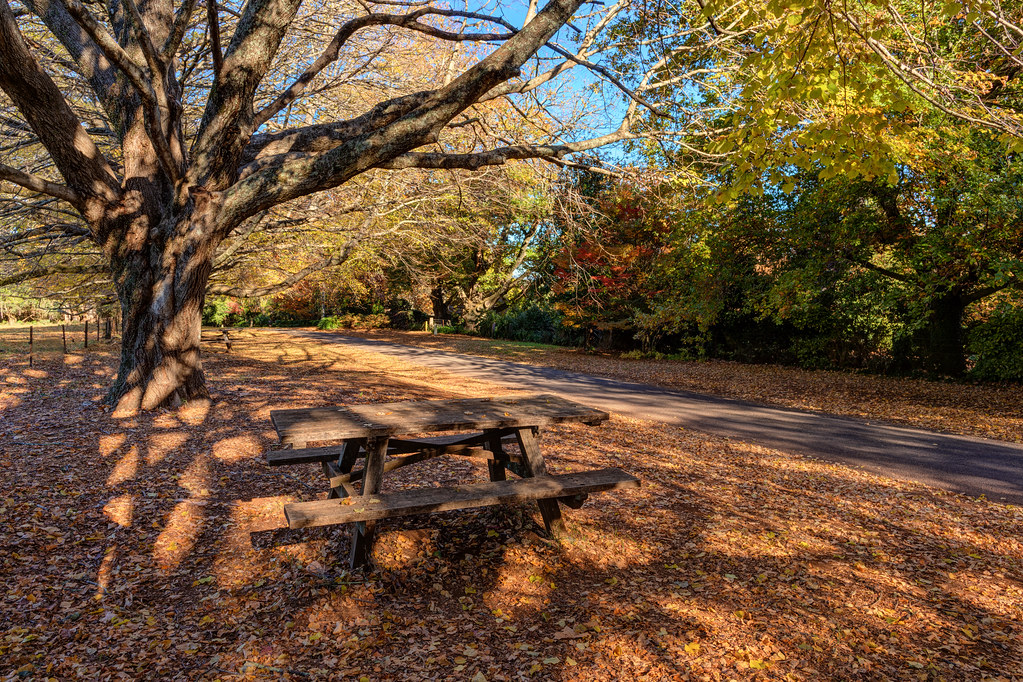 This spot would make a great location for breakfast in the crisp, autumn air.

Having captured what I decided was my final image for this visit and for this year, we headed back home.

It was an interesting couple of visits to Mount Wilson.  There is a lot to photograph, and I came away with some key learnings.

Firstly, it really is a location best photographed in autumn.  The conditions can make or break an image.  While I had some nice conditions, there was still something lacking.

Mount Wilson contains many locations to photograph, but some can be deceptive in photographic appearance.  For example, the quaint Church Lane actually contains ugly power poles along it, which detracts from the look and feel of the street.

Some locations simply look better when viewed with one's own eyes, and producing a pleasing image which captures the essence of the place is not a simple matter of plonking down a tripod and pointing the camera at what looks good without a camera.

A location such as Mount Wilson really warrants planning, in terms of the specific location, time of day, and weather.  Of course, not everything is necessarily controllable. Sometimes it is a matter of luck, particularly when coming from a place where the weather can be quite different.

Mount Wilson is a location which needs more than one visit (or even several visits) to do it justice.  I am sure I will head back there again next autumn, but unless the conditions I seek all align serendipitously, I do not think I can achieve a better image of Laburnum Steps. What I captured is as good as I can get unless a specific set of conditions exists.

On that note, Kalan Robb happened to be a member of the site on which the online discussion about autumn photography was taking place, and joined in the discussion.  I suspect it came to his attention because I had mentioned him there and provided a link to his excellent article on photography in Mount Wilson.

About his image of Laburnum Steps - the image which was my source of inspiration - he provided some insight into it.

Firstly, he does process his images quite differently to the way I process mine, which I suspected, and which he confirmed.  His processing is more intense, but effective.

What was more important was the conditions, which he said made up for 70% of the result.

He shot his images in 2015, during whose autumn it got colder much faster than what I had experienced.  Crucially, it was wet at the time.  On that morning, he explained, it had been raining steadily, which produced the misty glow.

What my images lacked was wetness and mist.  It simply had not rained and was not cold enough to produce those highly atmospheric conditions I wanted.

Kalan explained that the abundance of leaves on the ground was due to heavy rain and wind the day before.  My deduction is that while many of the leaves had fallen from the trees, they had not been blown away; and that the rain-soaked ground may have played a significant part in keeping them in place.

So, there is some insight into the conditions. These conditions would have been perfect for my desires, but on both visits, it was not to be. It could take me years to encounter conditions like that, and it may simply never happen.

What I do have is a chance, so I will return next autumn and see what I encounter.  There is more work to be done at Mount Wilson.