The Making of "Wine is a Primary Industry"

On Christmas Eve of 2008 I was inspired to create an image.

I produced Wine is a Primary Industry. 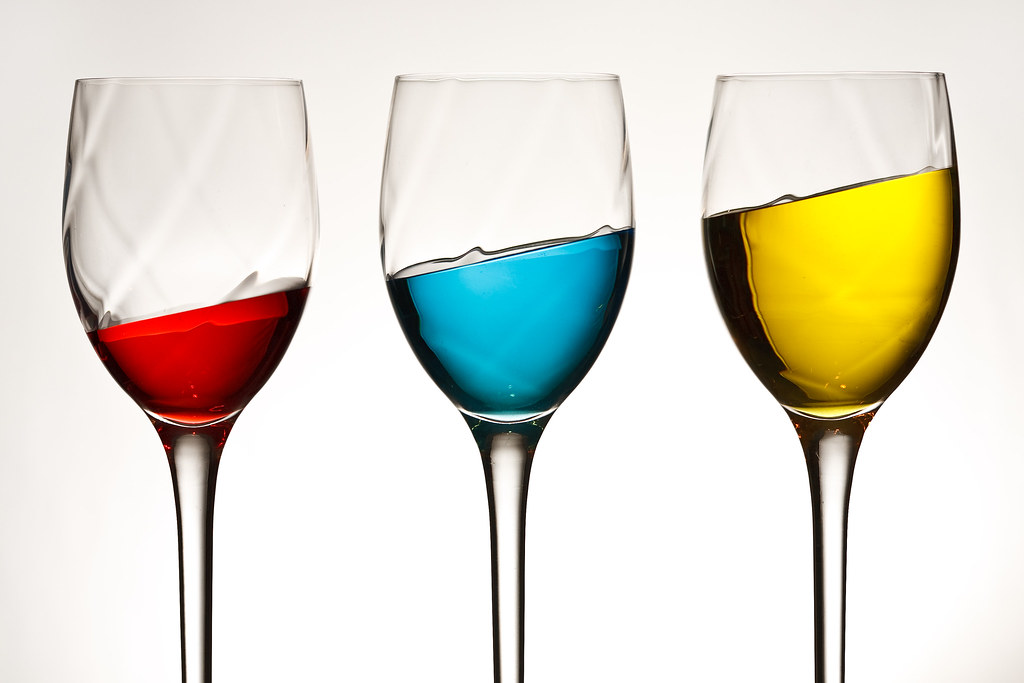 Wine is a Primary Industry

I knew some time prior that I wanted to create this type of shot.  I saw some incredible images along this line, created by another Flickr photographer.  This inspired me to actually do it.  I had been busting to create at the time, and this guy's work got me revved up.

The setup was quite simple, but took a long time to arrange.

I spent around an hour and a half just setting up this shot, and 1/200th of a second actually capturing it.

The amount of work that goes into setting up a shot like this is quite time-consuming and very fiddly.  One needs to be exact, as you will see.

A while back, I bought some food colouring, knowing I wanted to create this type of image.

I knew how I wanted to light the scene: pure white backdrop, with backlighting.

The final flash setting was 24mm at 1/64th power.  This was sufficient to illuminate the backdrop and not blow out the detail in the glasses, or bleed light around the edges of the glasses.

Camera-wise, I had an 85mm prime and another PocketWizard attached, all mounted on a tripod.

I placed one of the wine glasses on a pedestal (a moderately large box).  I took some reference shots to check the exposure, and make sure that what my mind saw translated to the camera's chimp screen.  I fiddled with exposure settings, and went with 1/200th at f/5.6 (my base exposure settings when I am using strobes).

I soon found that my 85mm lens did not give me the nice, tight framing I wanted, and its rather long minimum focusing distance (MFD) of around 90cm prevented me from moving it closer to the subject.  I knew that I needed my 135mm prime, whose MFD is also around 90cm.  This gave me much nicer framing.

To set up the wine glasses, I used a plastic cutting board.   I used large blobs of Blu-Tak to stick the bases of the glasses to the cutting board.  I used a T-square to line them up evenly.  The glasses had to be affixed to a flat surface, as the entire assembly would be tilted on an angle, and I could not risk the chaos of the subjects moving out of alignment, or far worse, sliding right off.

I placed a thick book under the left side of the cutting board to tilt the glasses to the right.  The slant is around 13 degrees.

I tilted the camera so that the tops of the wine glasses were parallel to the top edge of the frame.

The next part was the liquid.

I pre-mixed the red, blue and yellow food colouring with water.  I used way too much colouring at first (half a cap full), and with the blue in particular, it was too dark.  The yellow was also too rich, and appeared orange.  I then diluted all of the mixtures considerably so that they were saturated enough to look nice, but not too saturated to appear dark on camera.

I poured out even measurements of the liquids into a jug for dispensing into the glasses.

Unfortunately at first, I used the same amount of liquid in each glass, which meant that the surfaces of the liquid in the glasses did not line up.

Now, pouring liquid is actually fiddly business.  I discovered quickly that using the jug was not a good idea, as there was too much splashing (even when poured slowly, as I was doing), which meant that there were droplets of liquid on parts of the glass above the liquid line.  It was also harder to control the amount of liquid dispensed.  Back to the sink for a wash and dry.

When setting up again, I reached for a funnel, and used that to complete the job.

There was still a little bit of splashing, so I used cotton tips to touch-dry those little droplets on the inside and outside of the glasses.

Finally I was ready to shoot.  I ended up capturing three images.  I captured the second because I had missed a spot on the blue glass.  The third and final frame was captured because there were a few of droplets on the stem of the yellow glass.

To say I was pleased with the result is an understatement.

However, as I have outlined, just getting to a point where I was ready to actually shoot was very time-consuming, consisted of trial and error, and was fiddly.

There was very little post-processing: just conversion from raw, contrast adjustment, tighter cropping, some sharpening (not really needed), and a bit of dodging of the not-so-white corners where the light faded off.

Oh, and the wavy lines above the liquid lines are a result of the geometry of the glasses; they have a swirled pattern which protrudes away from the curvature of the glass.

To top off the experience, I later won an award for this image at my camera club.

Behind the Scenes, Lighting, Still Life