Modern cameras, including those built into smartphones, have the ability to record the GPS coordinates of the location at which an image was captured.

One of the features that I love about my Canon EOS 5D Mark IV is its in-built GPS receiver, which I enable when shooting.  I like to record the exact position at which my images were captured, and for our trips to Africa, I plot the locations on a map to see where we have been.

However, there are some situations in which it is not appropriate or desirable to reveal where an image was captured.  In my case, those situations include photography within a private residence, or photography of wild rhinos in Africa.

This is not a problem, as the GPS information can be stripped from image files.

My intended approach was to clear the GPS metadata fields from within Adobe Bridge.

Here is a view of the GPS information displayed for one of my images (not an image of a rhino) in Adobe Bridge: 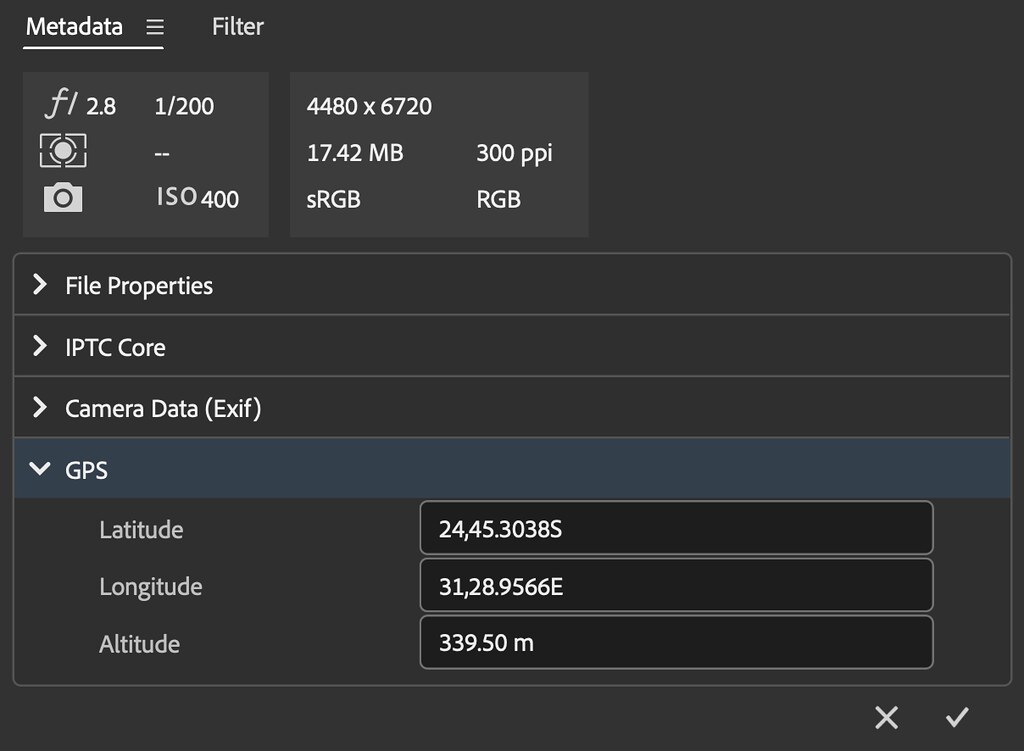 And here is the information displayed when right-clicking the file (on a Mac) and selecting 'Get Info'.

In both cases, the GPS coordinates can be clearly seen.

I then cleared the GPS metadata fields in Adobe Bridge.  Simple.

Here is a view from within Adobe Bridge, showing the empty GPS metadata fields after I had cleared the data: 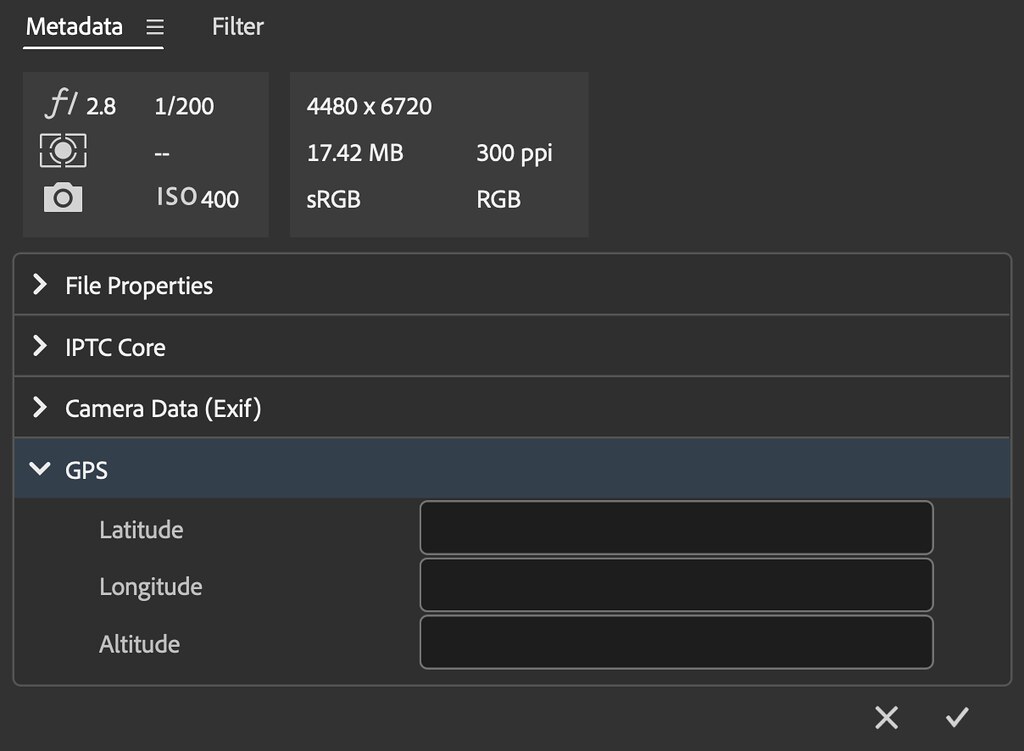 The GPS information is absent.

However, all is not as it seems!

This is what the Mac's 'Get Info' revealed:

The GPS information is still present!

How can this be?

All that I needed was a simple method of removing the GPS information from images, but without removing any of the other metadata which I wish to keep, such as the title, description, tags, copyright information, equipment details and exposure settings.

I thought that simply removing the GPS information from within Adobe Bridge would do the job, but seemingly it does not.

While Adobe Photoshop does allow an image to be exported without the GPS data, the problem with that approach is that the equipment details and exposure settings are also removed, which is not what I want; I only want the GPS information to be removed.

Now, I am sure that there are numerous software tools which can easily allow specific metadata to be removed, but it would be a matter of messing around with different applications to see which was most suitable.

There surely had to be a better and simpler method, and after some searching, I found that there was.

As it turns out, the Macintosh's own Preview application allows simple removal of the GPS information without affecting any other metadata.

Here is how to do it on a Mac:

Click the information tab (an I in a circle), followed by the 'GPS' tab.

Here is a view of the GPS information: 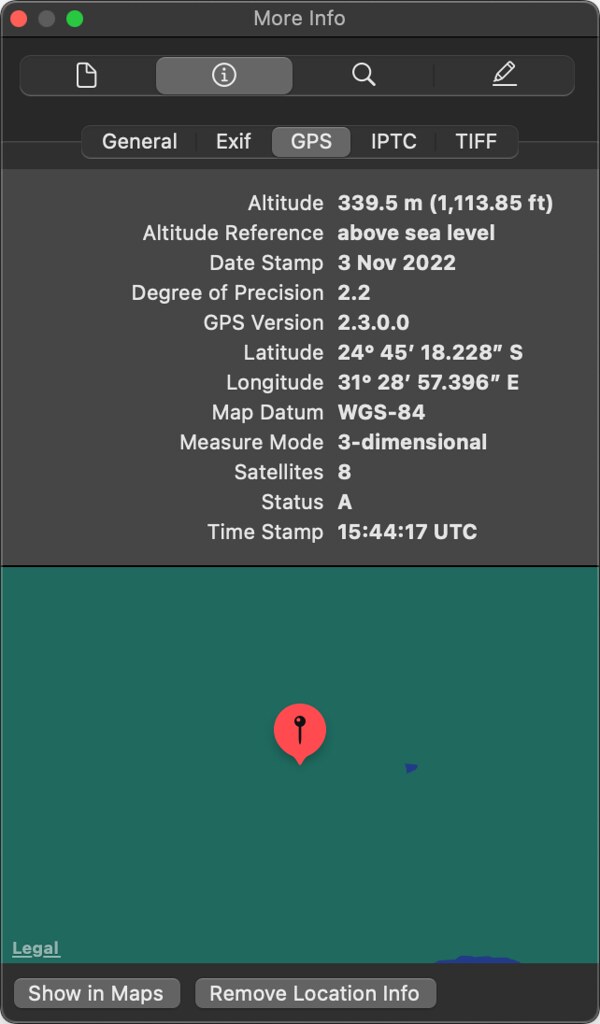 This approach does the job.

Here is a view of the 'Show Location Info' window after removing the GPS information from within Preview: 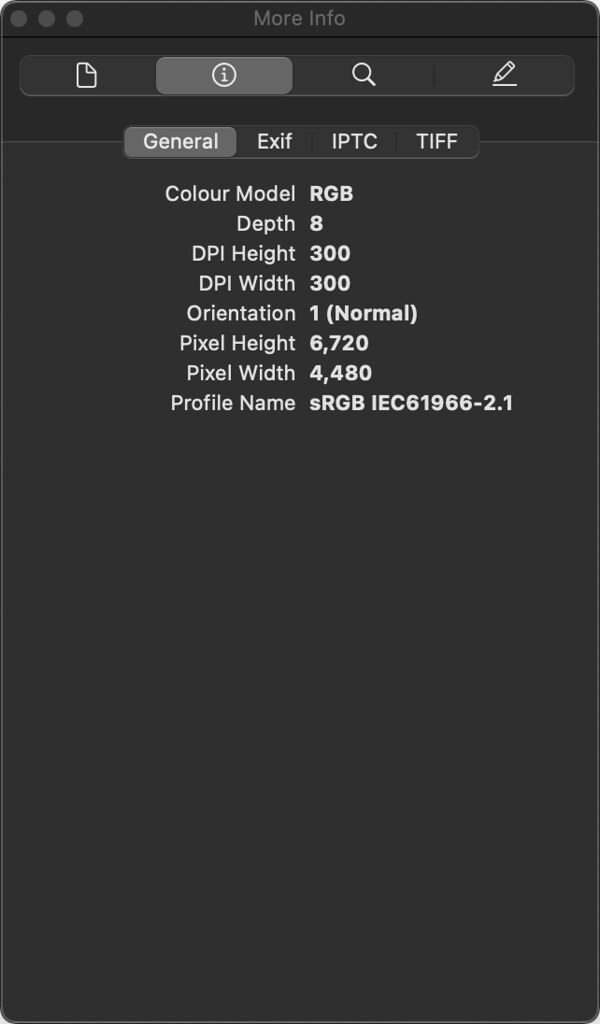 The GPS tab itself is now absent.

I needed to confirm that the GPS information really had been removed, so I inspected the image file properties using the 'Get Info' window, and this is how it looks:

The GPS information is absent, as expected.

For me, this approach works without requiring any extra software.

I found it quite surprising that Adobe Bridge did not actually remove the GPS data from the file, despite it giving me a visual indication that it did.

Hopefully this article will help any Mac users who need to remove only the GPS data from an image file, without affecting any other metadata.