The Making of "The Smoking Gun"

Almost five years ago to this date, an old Flickr contact of mine, Rich Legg, created a photographic image of a smoking gun.  I was impressed, and I commented on his image at the time.

I recently decided to have a go at this type of shot myself, and did so today.

Firstly, here is the image I produced this afternoon: 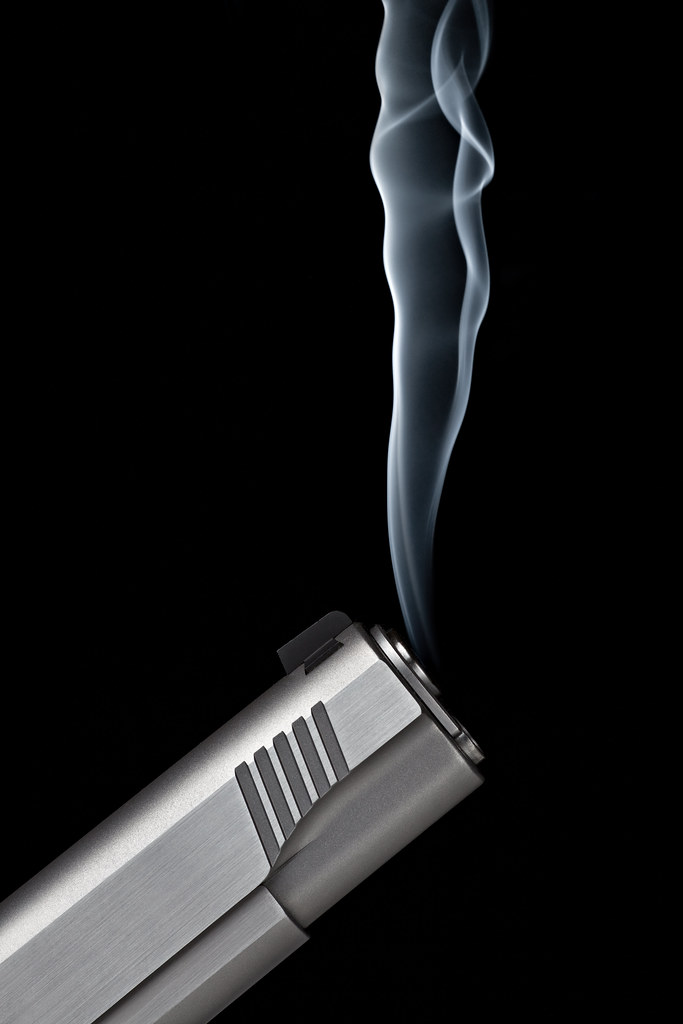 Now I will explain how I created it.

I vaguely knew how Rich went about creating his image, but I decided to take a slightly different approach.

While Rich did it in one shot, I decided in advance that the final image would be a composite of two images: one of the firearm, and another of the smoke.  I did not want to rig the set to capture both elements in one frame, and more critically, the lighting setups for each shot would be different, and would not work together.

To photograph the firearm, I did the following (not in this particular order):

With my remote shutter release in my left hand, using my right hand, I held my 80cm silver reflector to the right of the firearm, pointing upwards, to bounce light into the underside of the muzzle area.

To photograph the smoke, I used the same 'set', consisting of the black backdrop and the camera setup.  What changed most significantly was the lighting setup.

The smoke source was an incense stick I had bought.  I placed this in a glass bowl on the table where the pistol was positioned for the earlier shot, and lit it.

I placed the flash at 90 degrees to the right of the incense stick, about 10cm away, and elevated to the same height as the smoke.  On the flash, I dialled in 1/4th power and set the zoom to 80mm to concentrate the light to a narrower beam.

From that point it was simply a matter of snapping away, capturing various smoke formations wafting through the air.  I occasionally moved around, or waved my arm to agitate the smoke.

Shooting the smoke was the most challenging aspect, as smoke tends to be unpredictable, and it can take a while to score an aesthetically pleasing, well-composed shot of smoke, especially when it is to be used in Photoshop compositing as the smoke emanating from the muzzle of a gun.

After many shots, I landed one or two that were useful.  I settled on the second of the two candidates.

To create the final image, I performed raw conversion on both the firearm image and the smoke image.  I rotated the smoke image so that the smoke wafted upwards rather than at the angle at which it was moving at the point of capture.

I added the smoke image as a new layer in the firearm image, re-positioned it to align with the muzzle, added a black layer mask and painted the smoke into the image using a soft white brush at 100% opacity.

As anyone who has shot smoke can attest, smoke tends to appear blue.  To counter this issue, I added a desaturation adjustment layer, dialled down the saturation in the smoke so it appeared a more natural grey, and using a black layer mask, I painted the desaturation effect onto only the smoke.

For those curious about the firearm, it is a Kimber Stainless Gold Match II, chambered in 9mm Parabellum.

In conclusion, a few important legal and safety-related notes:

I hope you enjoy both my image, and learning about how I created it.