This past Queen's Birthday Weekend, we headed into the Blue Mountains for a restful few days in the wintery, country air, away from the crazy, lop-sided work hours, lack of sleep and constant illness I had been battling in the weeks leading up to it.

Arriving on Saturday afternoon, we stayed in Leura, and decided mostly to visit the tourist attractions in Leura and Katoomba, even though we had both been to some or all of what we had seen.

Part of the trip was to encompass photography, so I made hay while the sun shone, as for most of the trip, the weather was bleak, misty and wet.

A little after arriving and checking in, we headed to the tourist-saturated Echo Point, where I shot a number of images of the Three Sisters in different lighting.  I was naturally waiting for golden hour and twilight light. 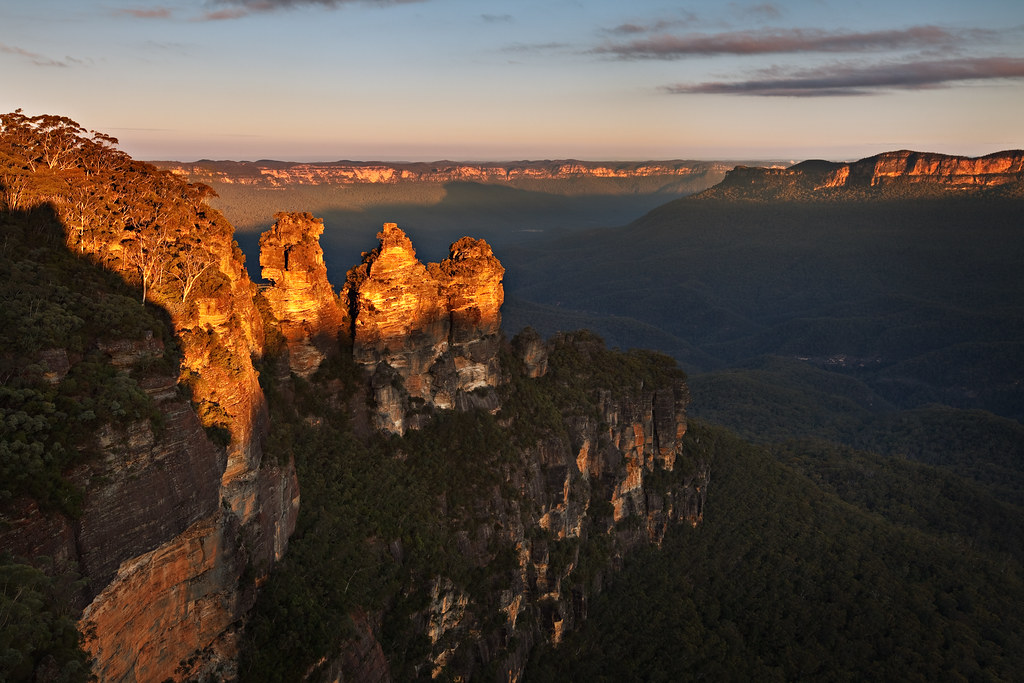 An image of the famous Three Sisters at sunset is somewhat of a photographic cliché, but one I had not personally repeated until this trip.

After the sun had set, I shot more images in the twilight light.

Later that evening we headed to the Heritage Hotel for a fantastic meal and bottle of Penfolds Bin 389 at the Jamison Views Restaurant.

After dinner, I decided to head to Sublime Point in Leura so that I could photograph the Milky Way in the mountainous darkness.  Late at night, we trudged through the darkness of the bush to land at Sublime Point, where I captured a number of exposures.

While the Milky Way was visible even with one's own eyes, it was not as spectacular in the resulting images as what I had captured weeks earlier at Kiama Downs, where there is more surrounding light pollution.

The plan for Sunday was to head to Leura Cascades for some waterfall photography, and then to Scenic World via Echo Point.

On the Sunday morning, the weather was quite misty and grey - fantastic for forest and waterfall photography, but useless for our intended visit to Scenic World!

We spent quite a while at Leura Cascades, and met up with another photographer while we were there.

Here is one of the images I shot of the upper part of Leura Cascades: 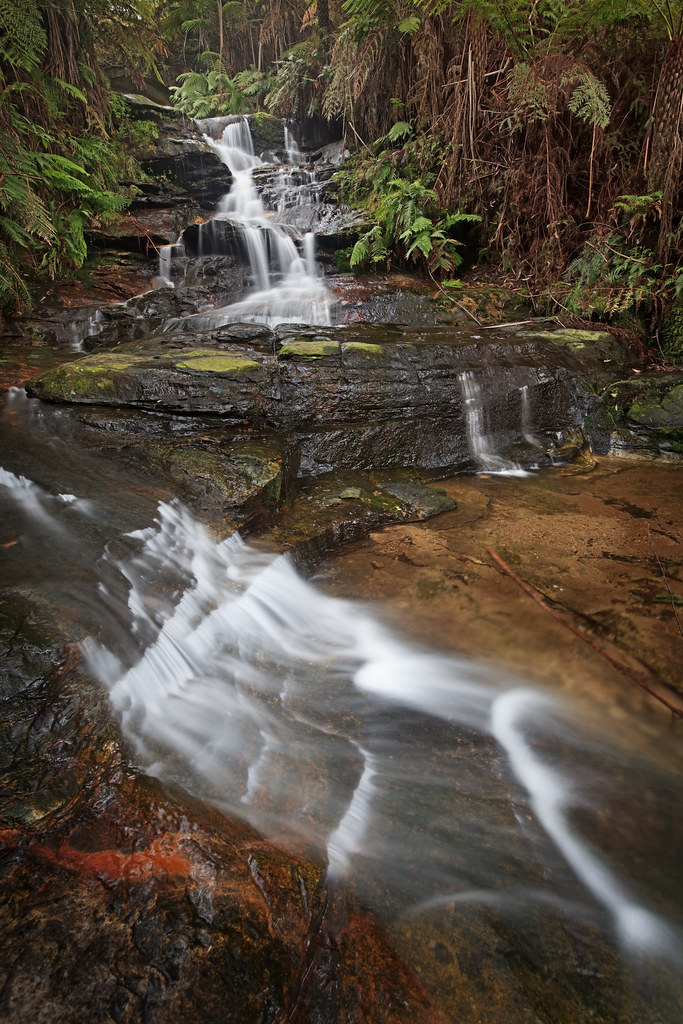 On the way back up the trail to the carpark, I stopped to photograph this nice view of the Chelmsford Bridge: 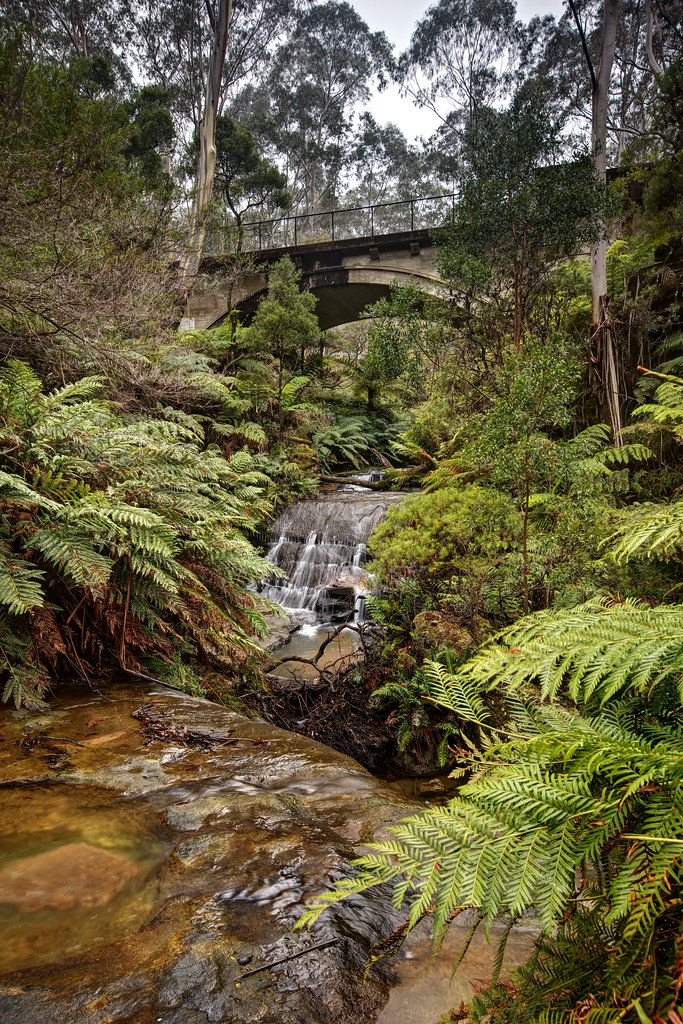 After our visit to the cascades, we headed back to Echo Point to take the Three Sisters Walk and walk onto the first rock in that formation.

When we arrived, the Jamison Valley was enshrouded in cloud and mist, and the Three Sisters could not even be seen in the white void.  With mountain weather being as volatile and dynamic as it is, there was a lot of atmospheric change taking place, and the Three Sisters came into view and became partially obscured a number of times.

The weather sure did not keep the tourists away, with many of them taking photos of each other with the completely obscured Three Sisters invisible behind them!

We headed over to the first Sister and sat on the bench there for a few minutes, taking in the views and resting, before heading back up the steep stairs, along the path and back to the car.

By this point we had decided that Scenic World was a pointless visit, as it would be difficult to see any of the valley's views in those conditions, so we headed to Leura Mall for lunch and stopped in Leura Cellars, where we headed downstairs into the fine wine cellar and bought a few special bottles to save for a rainy day in ten or twenty years' time.

From there, we headed back to the hotel for an afternoon nap before heading out for dinner at Silk's Brasserie in Leura.  The dining experience there was very pleasant, and the restaurant manager went out of his way to return the unusually large tip we had accidentally left!

The plan for Monday morning was to head home after breakfast, which was a wise idea, as we had a very quick, smooth run, encountered no dramas despite the constant rain, and avoided the utter chaos we later saw on the news that night as the majority of the holidaying population all decided to simultaneously descend upon Sydney in unequivocally deplorable conditions!

All in all, it was a much-needed trip which provided a variety of weather, a few pleasing images, and a desire to return for more photography over day-trips, as well as the desire to explore more waterfall photography, as there are many waterfalls in the area we did not have time to visit, which in the right conditions would make for pleasing images.