We have been back from Africa for nearly a week now, and it has been several days since I wrote about our first day in Africa, so as I sit here on my time off work, it is a good time to start relating the details of our big adventure in the African wilderness.

4 October, 2012, was the day our safari in Kruger Park was to begin.  After a very long first day in Africa and a good night's sleep at the Protea Hotel OR Tambo, we awoke and prepared for the big day ahead of us, commencing with breakfast with Mario.

We had a charter flight to catch from Jo'burg airport to Motswari's private air strip.  Within a matter of hours, we were boarding a Cessna 208B Grand Caravan for a ninety-minute flight north-east to the Timbavati region of Kruger Park.

The views over the landscape were spectacular, especially when we reached the meeting point between the highveld and the lowveld, where a long ridge of flat, craggy mountains descends quite sharply to the lowveld.

As we approached Motswari and began to descend, I was eaglerly looking out the window at the ground below, looking for signs of wildlife.  At one point I saw an animal running along the savannah, but from our elevation, I had no idea what it was.

Soon enough we landed on a private dirt airstrip, and emerged from the plane to 40-degree sunny weather, where some of the rangers from Motswari greeted us, and drove us in one of the open-top 4×4 safari vehicles to the lodge in Motswari Private Game Reserve, where we would be based for the next few days.

Here is a snapshot of Mario boarding the 4×4, with our charter plane in the background: 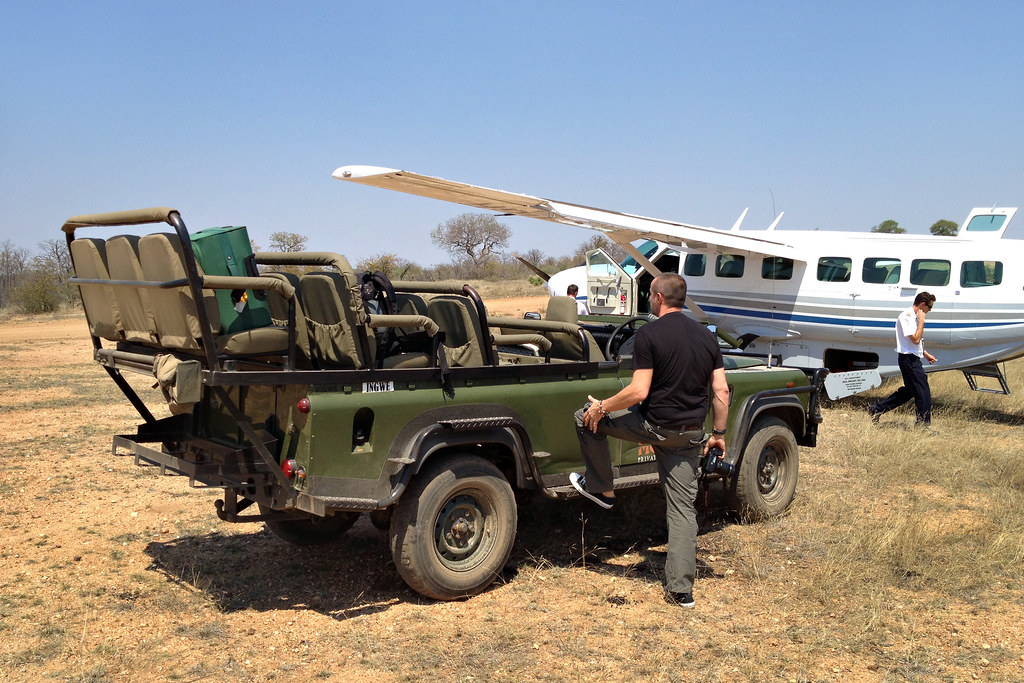 After arriving at the lodge, we met our hosts, checked in, and were led through the aesthetically appealing, quaint African lodge village to the Duiker Bungalow, which was our home in Kruger Park.

This was our lodging at Motswari: 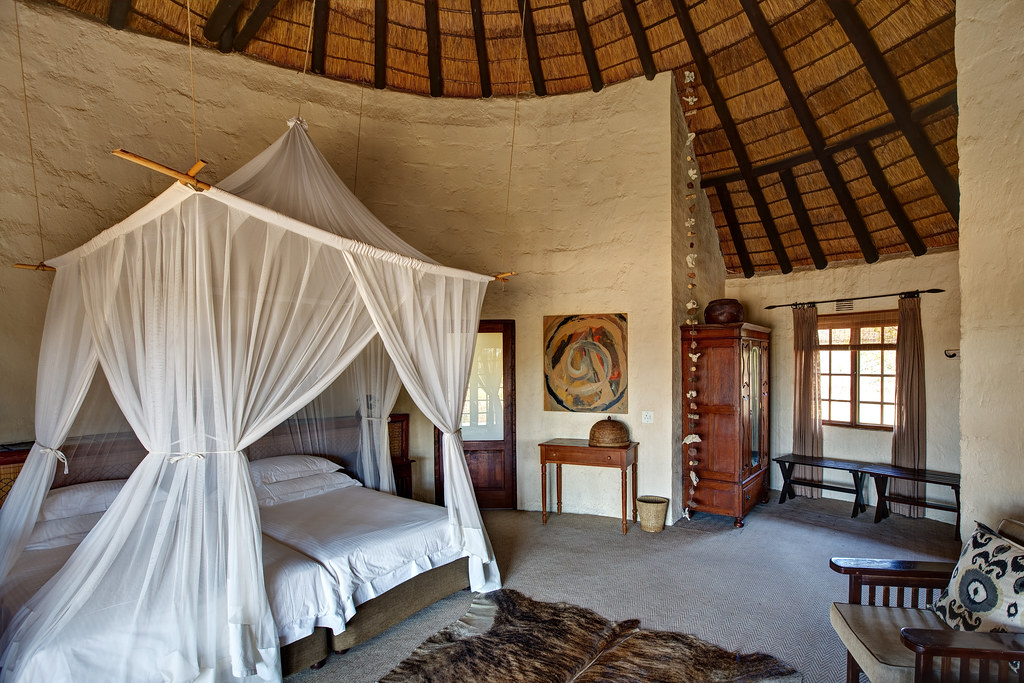 What an awesome place this was.  We felt from the very beginning, as soon as we landed, that we were in the real Africa, far away from urbanisation, and deeply engrossed in the African spirit, nature and the incredible wildlife that was all around us.

Just outside the second door (off to the left in this image) is bush and a watering hole.  There were two elephants grazing outside, wandering along past the lodges.  Ten minutes into our time at Motswari, and we had already seen one of the amazing creatures we would be seeing over the next few days.

The plan for the rest of the day was to settle into Duiker Bungalow, meet at the lunch bungalow at 2:30pm for a communal lunch, head for our very first game drive at 3:30pm, and then return for a communal dinner after dark.

Soon enough after arriving for lunch, drums started beating, and a parade of Motswari's African lodge stuff proceeded into the lunch area, singing an incredible African song and bringing the freshly-prepared food.  It was a sensory overload; all of a sudden we were in the thick of the ultimate African experience.

After lunch, it was time to get our gear ready and meet at the reception for our first game drive.  I had brought my long lenses, but also an ultra-wide lens for landscape shots.  Armed with my Canon EOS 5D Mark II and 300/2.8 on a monopod, my 1.4x and 2x tele-converters, a 70-200/2.8 and 16-35/2.8 in the bag, a tripod, plus plenty of memory card capacity, we headed to reception, where we met Chad Cocking, an excellent wildlife photographer and one of Motswari's rangers.

In the lead-up to our trip, we had been looking at the Motswari Ranger's Diary, a blog verbally and visually detailing each day's game drives and wildlife sightings.  Chad is the main author of the blog, and took many of the photos displayed on the blog.  In preparing for the trip, we were very eager to have Chad as our ranger, and Mario was able to secure him for the duration of our stay!  To say we were pleased was an understatement.

We met Chad and were also introduced to Petros, our tracker.  Petros would come with us on each game drive, looking for tracks and other signs of wildlife as we travelled throughout the reserve.

The party consisted of Xenedette and I; Mario, our safari leader; Chad, our ranger and driver; and Petros, our tracker.  We had the luxury of a private vehicle, whereas all of the other Motswari 4x4s we encountered had up to ten people on tour.  The amount of photography gear we had with us was a nice substitute for eight other people!

Our first game drive shortly began.  For the next three and a half hours, we were in the wilderness, seeing and photographing amazing animals, some of which we had seen at zoos, and many of which we had never seen at all.

The first wildlife we saw was an elephant bull, who was strolling through the scrub, munching on leaves and twigs.  Shortly after, we encountered another elephant bull, who meandered down to a watering hole for a drink.  We watched him drink and spray himself with water to cool himself in the intense afternoon heat, and then continued on.

The next stop was Argyle Dam, where we saw a crocodile and several storks.  We soon moved on, and spotted plenty of impala and a few waterbucks on the way to our next destination, and the incredible surprise — and highlight of the drive — that was awaiting us.

At around 5:15pm, we turned up at a large termite mound, where two other safari vehicles were parked, clearly allowing their occupants to view something exciting.

Our own excitement grew, as we moved close to the mound and laid our eyes, for the very first time, on a wild leopard!

This is Makepisi, a male leopard who inhabits the Timbavati region of Kruger Park 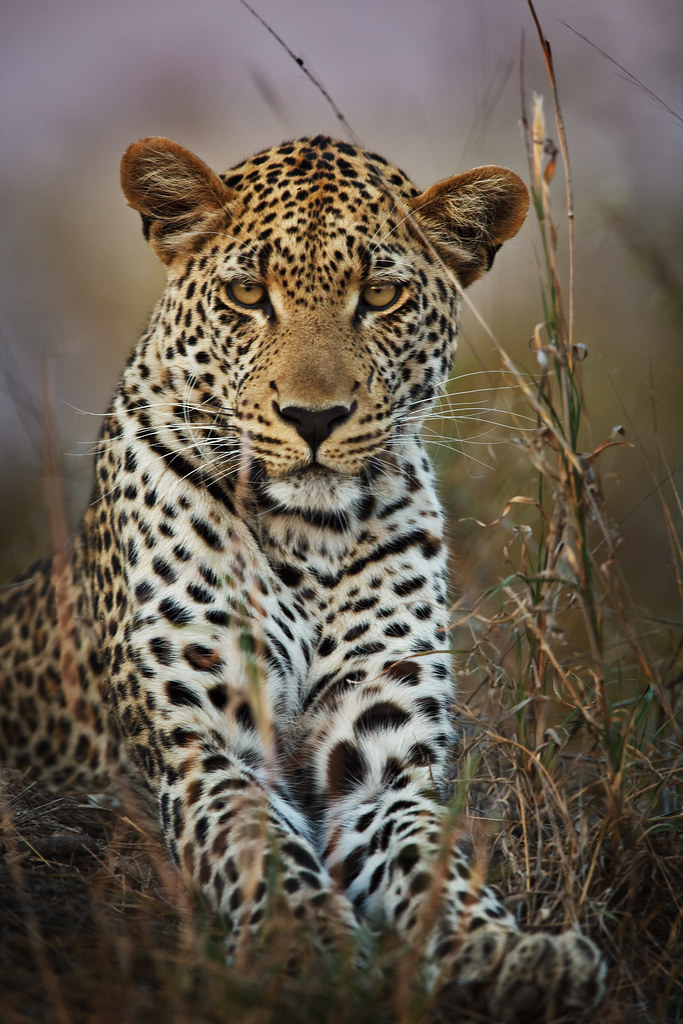 Makepisi was sitting on the termite mound for quite a while, and as the light fell, we continued to observe and photograph him, while he sat only several metres away from us.

A little while later, Petros turned on the spotlight, which allowed us to continue to view and photograph Makepisi as the light fell and night rapidly approached.

Here is an image I captured of Makepisi in the glow of Petros's spotlight: 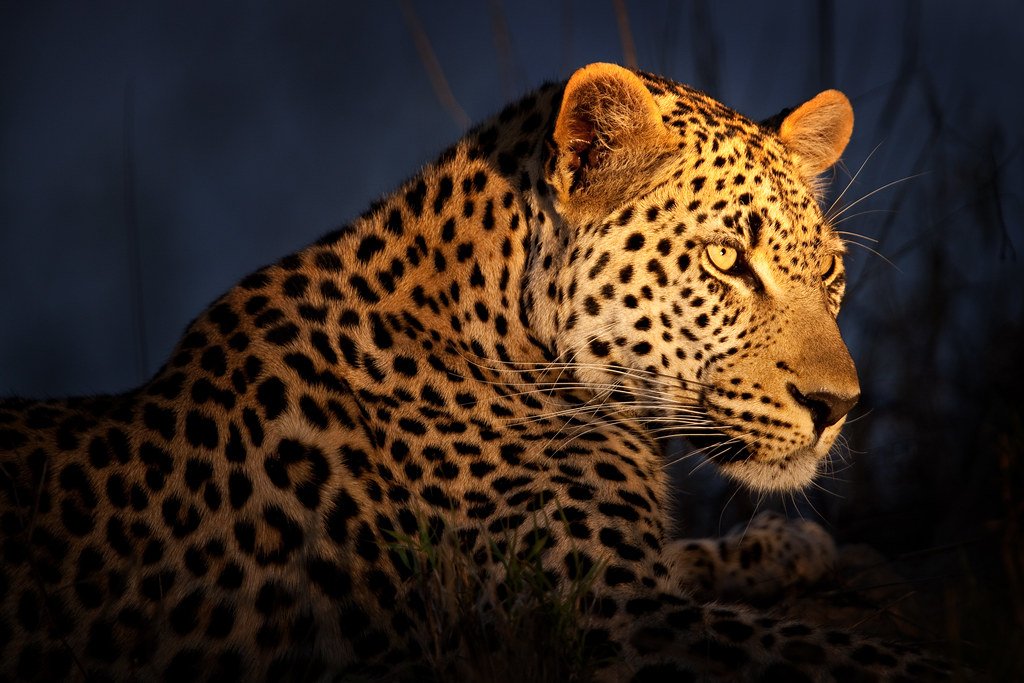 Seeing a leopard in the wild was an amazing experience.  He was only metres from us, but completely unfazed by our presence.  He had been resting on the mound, and his long night of hunting for food had not yet begun.

Unfortunately, it was time to move on.  Chad drove a short distance, where we stopped for a sundowner.  The sun had very recently set, and I grabbed my tripod and 16-35mm lens to shoot a landscape image of our first real African sunset. 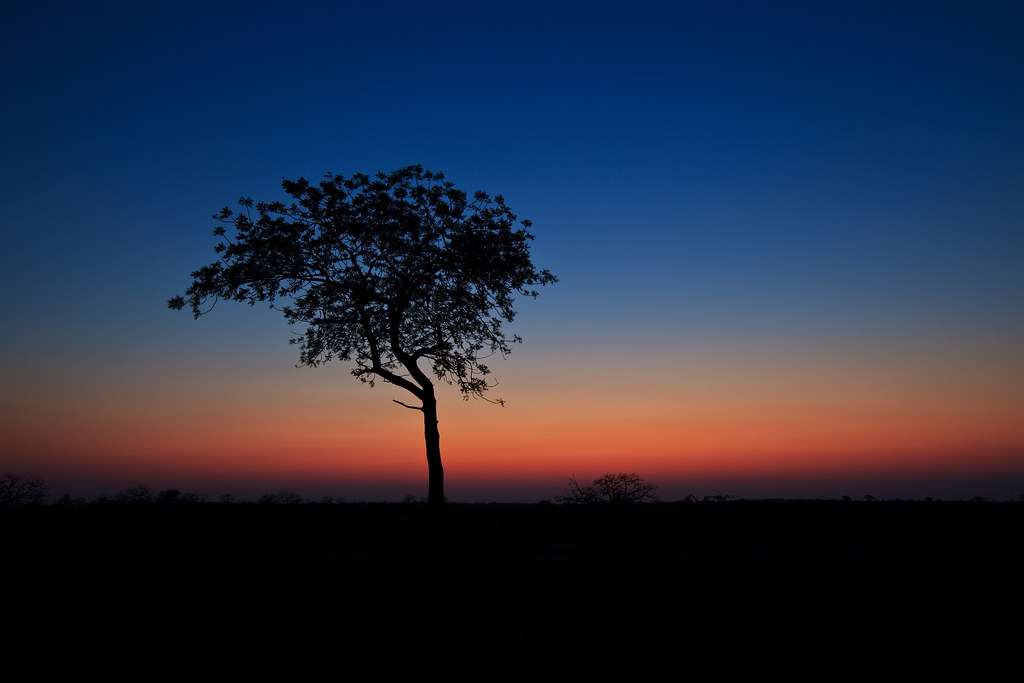 As I was shooting this image, Mario was shooting me, while Chad and Petros prepared the snacks and drinks for our sundowner as Xenedette simply soaked in the atmosphere, glad to be where we were, doing what we were doing.

As I finished my landscape images, Mario and I joined the party and debriefed while we sipped pinotage and recalled the experience of our first leopard sighting and our first game drive.

It was an intense day, and to see a leopard — one of the so-called Big Five — on our very first game drive, was a very exciting experience.

Soon after, we all packed up and headed back to the lodge for a communal dinner, further discussion over wine, and a good night's sleep, as the next day would start with a game drive at 5:30am.

Chad also blogged about the day's activities, and his recollection can be read at the Motswari Ranger's Diary for the 4th of October.