Our third day in Africa was the second day of our photographic safari in the Motswari Private Game Reserve in greater Kruger Park.

It started with an early rise, some time before 5am.  We were heading out on our first morning game drive, during which we would encounter lots of wildlife, and another special surprise.

The morning was quite cloudy, which on the one hand was bleak and gloomy, but which on the other hand made photography much easier due to the lower contrast.

Chad and Petros whisked us off nice and early, first encountering a few zebra in the scrub, before stopping for a landscape shot a short while afterwards.  Unfortunately the zebra were not out in the open, so landing a clean shot was difficult if not impossible.  Photographic woes aside, just to see a bunch of zebra in the wilderness was pleasant in its own right.

Our next photographic stop was for a wildebeest and some impala, followed shortly after by a lone spotted hyena who was hot on the trail of... something.  A few minutes later we encountered another lone hyena who was lazing on the ground, unfussed by our appearance.

Some twenty minutes later, magic awaited us: another leopard!

Not only was it a leopard, but it was a different leopard.  The night before, we had encountered Makepisi, a male leopard; but this morning, we had the pleasure of the company of Rockfig Jr, a female leopard who inhabits the southern part of Motswari Private Game Reserve.

What a magnificent leopard she was.

Here she is in her glory: 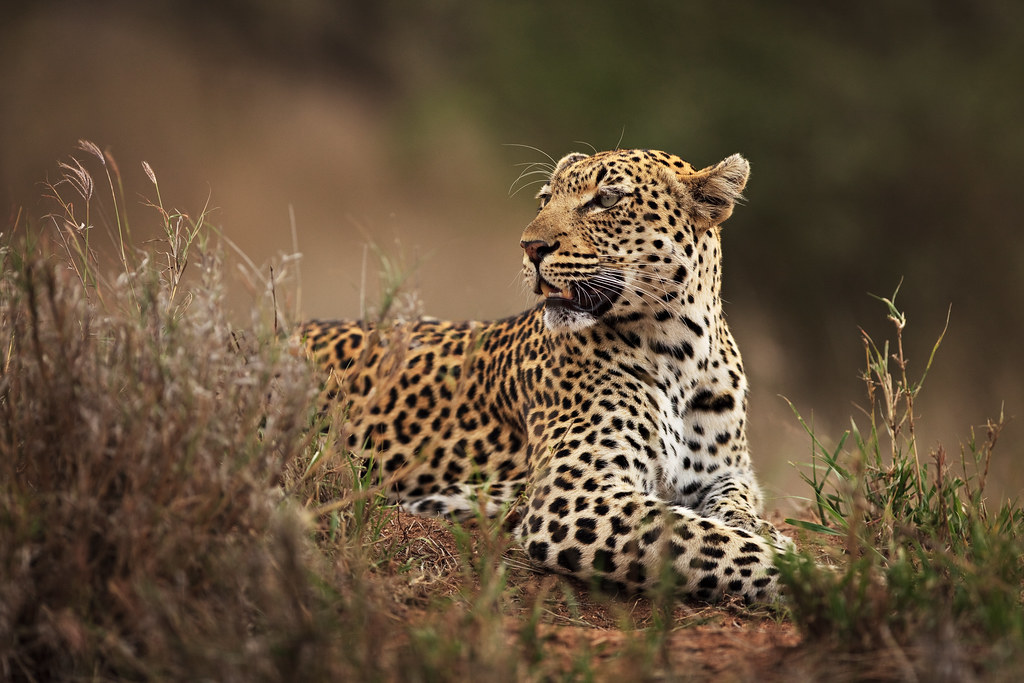 I landed a very pleasing selection of high-quality images in very soft light, and Rockfig Jr was quite the model.

Here is a close view of her profile: 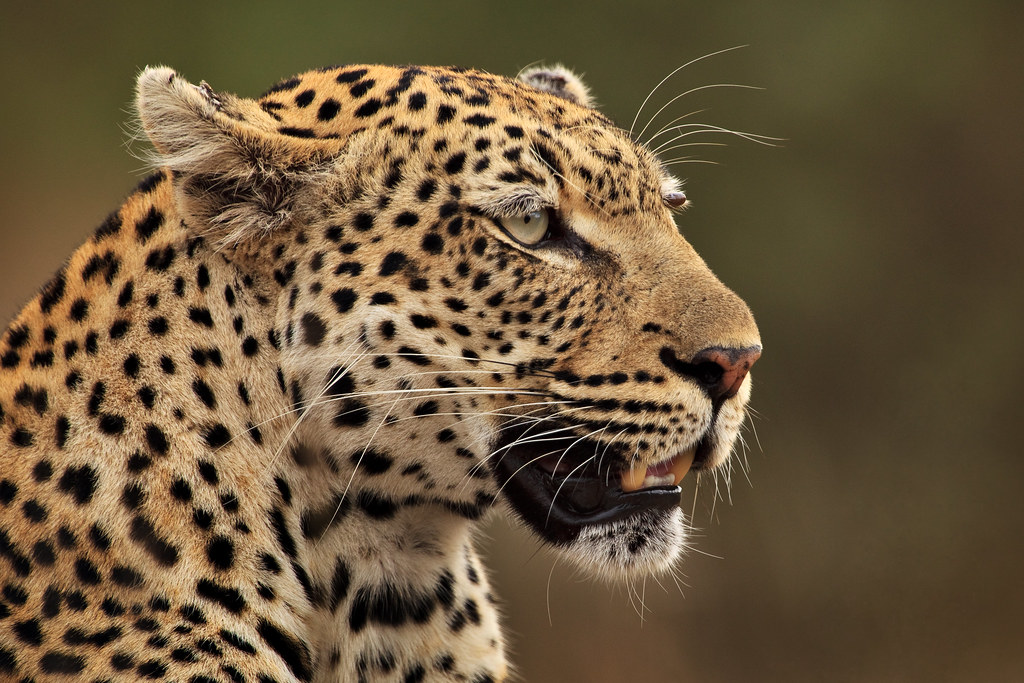 During the time we spent with Rockfig Jr, at one point she got up, walked right behind the vehicle, and headed over to a vantage point from which she keenly watched a warthog which was grazing in open sight in the not-too-far distance.  When Rockfig Jr passed behind the open-top vehicle, I was closest to her, and I estimated her to have been only three metres away from me.

In where else but Motswari can you find yourself three metres from a wild leopard?  It was spectacular.

Rockfig Jr kept her eyes on the potential prey she spotted a relatively short distance away, but evidently elected not to pursue it.

Way too soon, it was time for us to leave.  We had coffee and biscuits at Hide Dam, and then headed off, whereby we soon encountered a few wildebeest, followed by lots of impala.

Throughout the safari, we would encounter many impala; so common were they, that we did not bother to stop on each sighting; but early into the safari as this game drive was, we did stop and watch them for a while, during which time I captured this image of two males sparring: 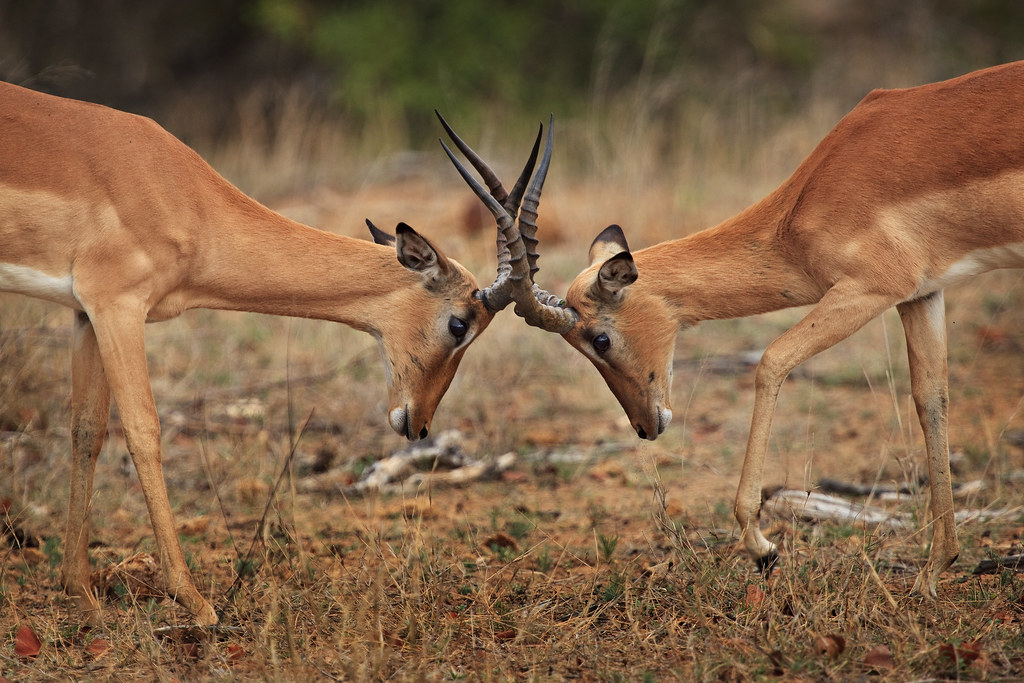 Our next sightings included giraffe and more impala, before we headed back to the lodge for a well-earned breakfast.

We sat down to a fantastic buffet, and cooked-to-order eggs, with a variety of juices, fruits and other food available.

After breakfast, we had quite a few hours or recreation and lunch before our next game drive, which would commence at 3:30pm and see us returning for dinner after sunset.  Lunch was announced by the beating of drums and the African songs sung by the Motswari staff who brought the food.

Our afternoon drive commenced, and there were sightings aplenty, with lilac-breasted rollers, giraffes, kudu, more giraffes, our first hippo, more impala, and then finally, another surprise, and another member of the Big Five.

Chad and Petros had led us to three white rhino: a male, a female and a calf.  Our timing was unfortunate, as the rhinos had just indulged in a mud bath, and decided to wander off.

The rhino mother and calf were heading to the river bed, which they would cross before heading up the bank and into the scrub.  We followed them and had some nice photo opportunities in the dry river bed before they soon meandered along.

Apologies for the lack of images; I have not yet published any of the shots I took during this particular rhino sighting; but they are coming in the near future.

As it was late in the afternoon, we headed off, and soon stopped for a quick sunset silhouette, and an image which captured the feel of Africa: 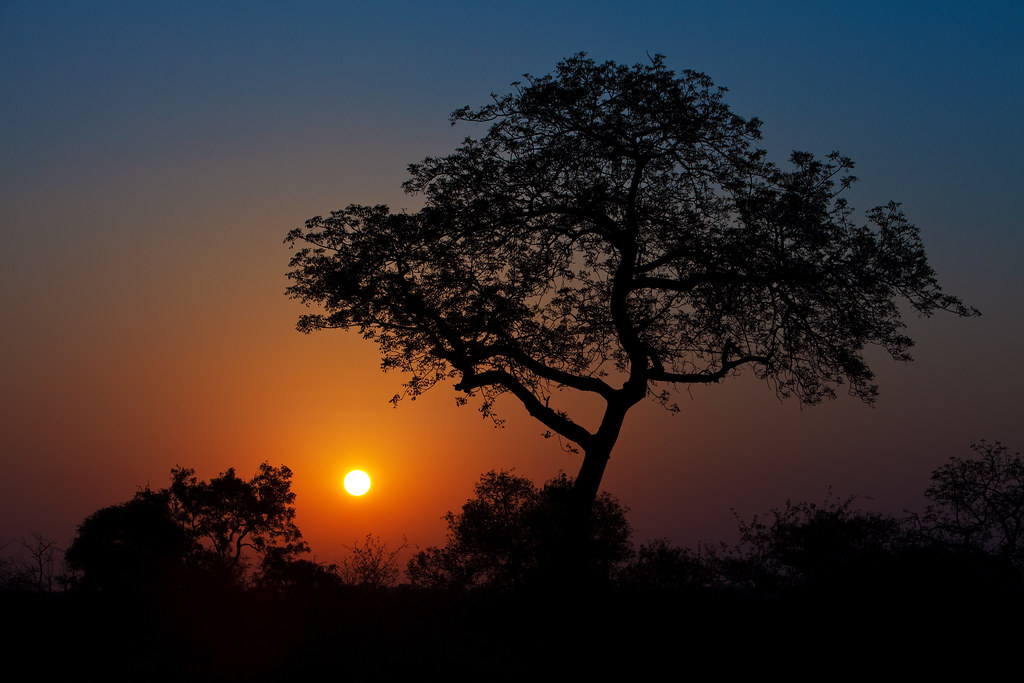 Sunset on the African Savannah

All this image needed was a leopard perched in the tree.  Not so lucky, I am afraid.

Shortly after capturing this beautiful sunset, we stopped for a sundowner before making our way onwards.

This time we encountered Nthombi, a female leopard, who Chad had earlier heard roaring in the north of the reserve.  We found her in thick bush, and using the spotlight, our Land Rover plus two others trudged through the bush, relatively closely following her.  It soon became apparent that Nthombi was stalking a steenbuck, so we had to back off and leave her to do her thing in peace.

During our short time with Nthombi, I did snap one shot of her stalking her prey, but it was not a usable shot.  Not to worry; merely being in the presence of another leopard, and watching her on the hunt, was more than enough of a reward.  Alas, it was time to depart.

Early during our morning drive, I had told Chad that I was keen to photograph a silhouette image of a dead tree against the Milky Way after darkness had fallen.  Chad showed us a particular tree at Big Nigrescens, and said we would aim to head back there on one of our night drives.

After the excitement of chasing Nthombi through the bush, Chad drove us back to Big Nigrescens, where I exited the Land Rover and set up my gear for a long exposure.

Here was the winning image I landed: 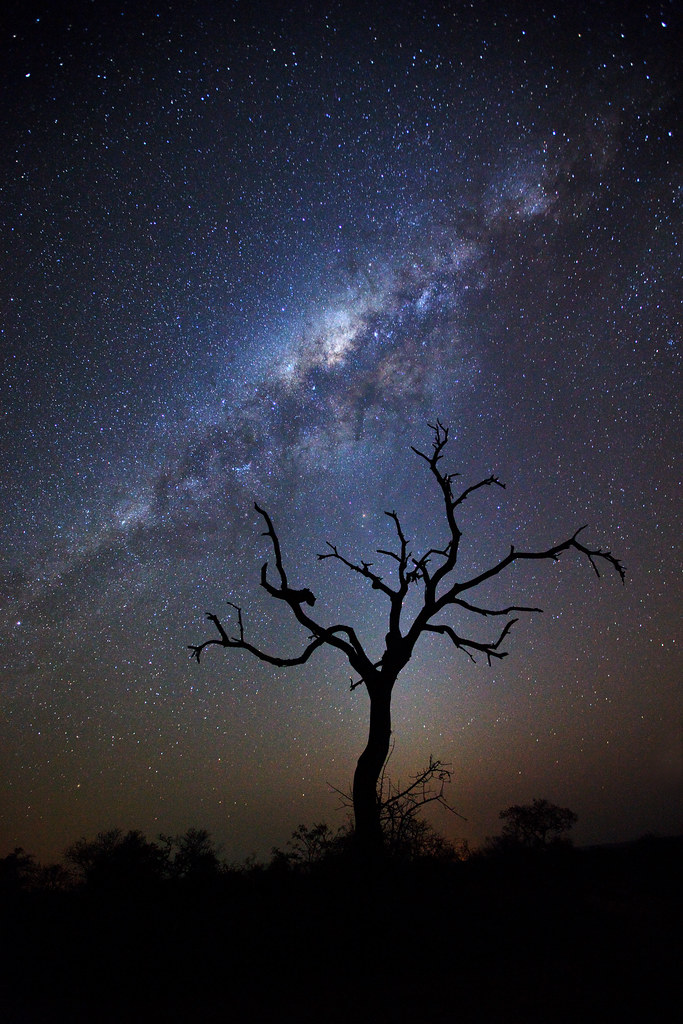 After a few long exposures, we headed back to the lodge, where a pre-dinner drink and a delicious meal awaited us.

After dinner and discussion, we were escorted back to our rondavel and we prepared for bed, as an absolutely huge day awaited us, starting even earlier in the morning, as we had all agreed to depart at 5:30am rather than 6:00am, at which time all of the other safari parties would also be embarking on their morning drives.

Day two of our Motswari safari experience had been a fantastic experience, but the best was yet to come.

Stay tuned for the next installment, in which it will be revealed that Xenedette would receive an absolutely awesome birthday present.