After an intense fourth day in Africa, during which we saw all five members of the 'Big Five' (which, for those who do not know, is a hunting term, not a relative descriptor of animal size) and a decent sleep, we rose before 5am for our final day in Motswari.

We knew that we had only one game drive left, and that later that day, we would be back in Johannesburg.

We headed out before 5:30am, and quickly encountered three elephant bulls which were grazing in a thicket.  The plan for the morning was to head to a termite mound which a pack of hyenas had hijacked and turned into a den.  We would later go looking for a breeding herd of elephants.

After spending a few minutes with the elephant bulls, we departed for the hyena den, and encountered a few zebras along the way.  I shot a few images, but the zebras were in the scrub, which was not good for photography.

A short time later, we arrived at the hyena den hoping to see some cubs.  We spotted only one older hyena cub, which looked at us for perhaps a minute before disappearing into the den, never to be seen (by us) again.

We then headed to Hide Dam, where we were fortunate enough to spot a hyena cub and two adults on the muddy banks.  Here is an image I shot of the hyena cub: 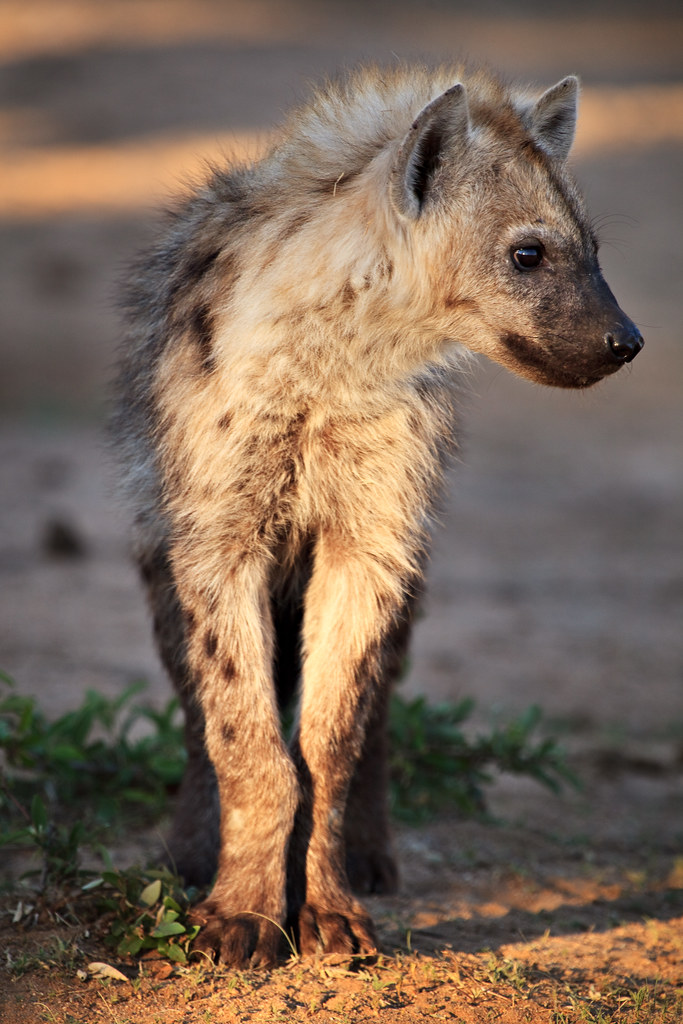 After we left the hyenas, we spotted an African fish eagle high in the tree tops, before Petros soon discovered leopard tracks.  We dropped him in the middle of the Timbavati to see if he could track the leopard, while Chad took Mario, Xenedette and myself in search of more wildlife while Petros was scouting.

Soon enough we encountered a stunning nyala bull walking to our right.  It crossed the dirt track some distance in front of us and then continued on its way through the savannah to our left.

Here is an image of that lone nyala I captured in the warmth of the morning light: 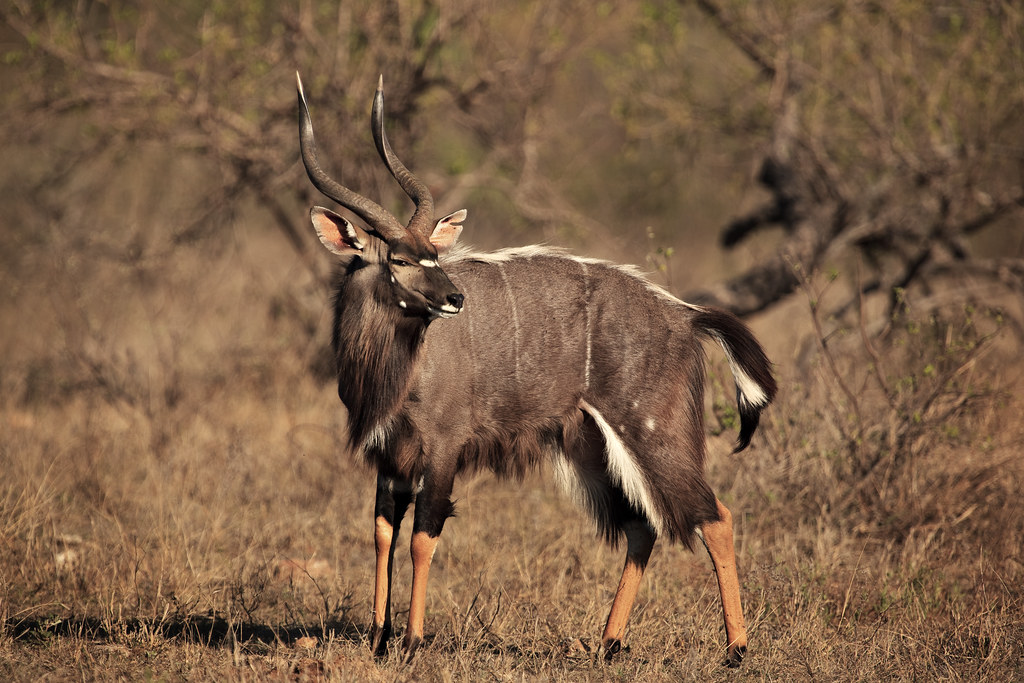 We continued on, and encountered a herd of zebras.  The herd decided to walk down the road on which we were travelling, and as we continued to follow, the zebras became more skittish and ran further along the road.  We followed them for a few minutes before they continued into the bush, at which we point we headed off.

Chad's plan was to take us to a breeding herd of elephants.  Before too long, we found ourselves literally surrounded by these gigantic African creatures.  We were slowly navigating the thick bush as we continued to immerse ourselves in the herd.  There were elephants all around us.  I counted at least eleven that I could visually identify from where we were at one point. 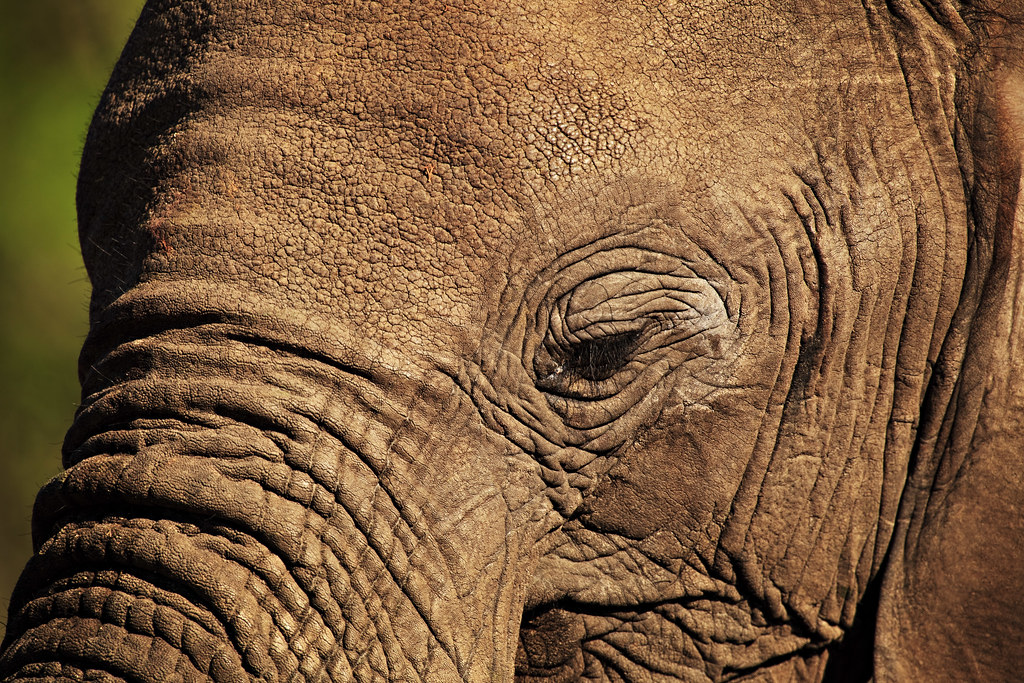 We spent around 30 minutes following the herd from within it, before heading back to see collect Petros and see how had fared in his quest to find a leopard.  Unfortunately he had no luck finding the elusive leopard.

On our way back to camp, we spotted a few white-backed vultures, more zebras, and a herd of impala drinking at a watering hole.

Soon we arrived back at the lodge.  Alas, our final game drive had ended.

We soon had breakfast and relaxed for a little before it was time to pack our gear.  We had some time to sit for a while, and during our down time, a nyala had come up to the banks of the camp, and was grazing a very short distance from where we had eaten breakfast.  We returned to the communal area where I found Mario photographing the nyala.

A little while later, two warthogs walked right through the tracks on the property, in broad daylight, completely nonplussed by the presence of ourselves and the other guests.

Our flight back to Jo'burg would be departing at around 1pm or 1:30, so we had to start making final preparations for departure, including the very difficult part of saying goodbye to Chad and Petros, knowing it would be a long time before we would see them again, and still on a high from the magic of the past four days.

Chad drove us to the Motswari airstrip, and soon we were boarding the Cessna (incidentally, the exact Cessna 208B Grand Caravan that brought us to Motswari) for the ninety-minute flight back to Jo'burg.  Soon enough we were in the air, departing the place that had changed us; the place that even as I write this article six weeks later, still affects me.

After a short stop to collect passengers from another airstrip nearby, we were in the air again, on the final trip back to Jo'burg.

During the game drive that morning, I had badly injured my ankle as I was repositioning myself inside the Landrover.  While it hurt at the time, as the day wore on, the pain became more intense.

As I was sitting next to Mario in the Cessna, looking down over the landscape I hated to be leaving, the pain became more noticeable.  By the time we got back to OR Tambo airport, I was struggling to walk.

Back at the airport, Xenedette and I had to say our goodbyes to Mario, who was heading off to Egypt later that day to collect a tripod he had left there, before venturing to Spain.  We thanked him for the magical experience we had just had, and promised to keep in touch, which we have done.

That night we were staying again at the Protea Hotel OR Tambo.  We arrived and checked in.  After settling into our room, walking became more difficult.  We headed down to the hotel's restaurant for dinner, but apart from my physical pain, I felt a sense of emotional pain.  The magic we had experienced over the past four days was over.

We were no longer in the company of Chad and Petros and the amazing Timbavati wildlife, and we were two again.  We felt Mario's absence as we had dinner, as the last time we sat in that restaurant, he was there with us as we discussed the trip ahead.

By now, walking was extremely difficult, and I was starting to worry, as we had a whole new adventure ahead of us the next day.  After dinner, we retired to our room, where I continued to think about what we had just experienced.  I wrote about it at the time, expressing the feelings I felt at the time.  Some of those feelings still exist now as I recall that night.

The 7th of October, 2012, was the end of an incredible experience that even now I miss.  I continue to read the Motswari Ranger's Diary, which is a blog written mostly by Chad, as he chronicles the daily game drive he and the other rangers take.  Reading that blog and seeing the images keeps me connected to a place that affected me strongly, as I recall our own experiences, and long for our next trip there.

The 8th of October would introduce a new chapter in our African trip, during which we would fly to Cape Town and experience people, places and adventures that were far removed from Motswari, Mario, Chad, Petros, Makepisi, Rockfig Jr, the Jacaranda Pride lionesses and the male lions that had dominated our existence for the first part of the trip.

Stay tuned for day six of our African trip, and the beginning of our adventures in and around Cape Town.