Our sixth day in Africa began a new chapter of what was a short but intense two-week journey.

The day before, we had been in the African bushveld, surrounded by amazing wildlife, some of which we had never seen before.

After the conclusion of that trip, we had flown back to civilisation, where the only wildlife was the denizens of Johannesburg!  There was a massive change of pace as the reality of the conclusion of our safari hit us hard.

On the morning of the 8th of October, 2012, we woke and prepared for the day ahead of us.  We had a midday flight from Jo'burg to Cape Town, so we had a little more time than usual to eat, get ready and hit the road.

I was still struggling to walk after sustaining an injury in the Land Rover during a game drive.  The night before, I was concerned about whether I would be able to walk properly, as I was limping around and also had the knowledge that we would have a few adventures ahead of us that required upward mobility.

Soon enough, we departed the Protea Hotel OR Tambo, and were boarding an Airbus A340 to fly two hours south-west to Cape Town, which as we would discover, would be worlds apart from the Timbavati.

We had booked accommodation at the Wilton Manor Guest House in Green Point, a locality close to both the city of Cape Town and the Victoria & Alfred Waterfront, a hive of social, entertainment, shopping and tourist activity.

Through Wilton Manor, we had arranged for someone to collect us from Cape Town and drive us to the guest house.

After we landed in Cape Town, we were soon greeted by our driver, who whisked us off to Green Point.

Apart from a few trips to and from Jo'burg airport, we had not spent any time on South African roads.  Hitherto, we had spent eight hours a day in a Land Rover in the Timbavati, where the only other traffic was another Motswari Land Rover, or a herd of elephants!

It quickly dawned on me that South African drivers are somewhat crazy.  There is incessant beeping and speed limits seem almost optional.  Later in the journey, in and around Durban, where I would be driving, I would discover for myself how crazy it can be.

Our driver drove us through the city, and soon enough, we saw the mighty presence of Table Mountain, an iconic geographical landmark that makes Cape Town world-famous.  Soon, we arrived at our guest house in Green Point.  Green Point is located high up, and overlooks Cape Town's stadium, with the V&A Waterfront to the north-west.

We checked in, and were soon entering our room, which was a very pleasant room with a private entrance from the street, as well as a private verandah and braai.

This was our home for the next few days: 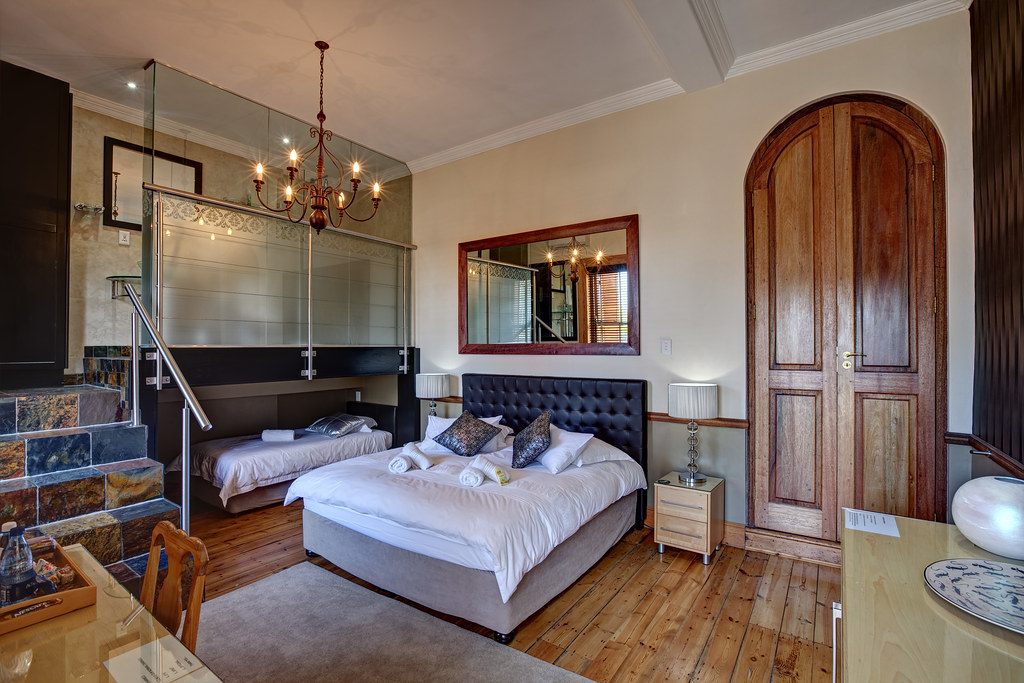 We settled in, and I jumped online.

In Motswari, Internet access had been almost unusable, as there was a problem with the WiFi at the time.  In Cape Town, we had much faster, reliable WiFi access right from our room.

A while afterwards, we decided to wander down to the V&A Waterfront and acquaint ourselves, as well as look for somewhere to eat dinner.

The Waterfront is about a fifteen-minute walk from Wilton Manor, and we would make that walk numerous times over the next few days.

We arrvived at the Waterfront, and I found it similar in atmosphere to Darling Harbour in Sydney.  We strolled around, and very quickly noticed a large ferris wheel, called the Wheel of Excellence.  Normally we would not bother with such an attraction, but we were tourists after all, and a comfortable ride high over the Waterfront would give us a nice visual orientation from a better angle.

So, we hopped in, and spent five or ten minutes viewing the Waterfront from high above.

After the ride, we decided to look for some dinner.  We meandered around, before being warmly greeted by a hostess outside a restaurant called City Grill.

She told us that zebra, an uncommon dish in South Africa, was on the specials menu that night.

We decided to head in.  We wanted something African, rather than something we can easily get at home.

We were soon seated, and presented with menus and the wine list.

The wine list was huge, and I spent quite a few minutes flipping back and forth.  Wine lovers we are, but we were spoilt for choice, and undecided.

One of the female staff noticed me agonising over the wine list, and offered to send the sommelier over to render some assistance.

I was soon greeted by Barry, with whom we very quickly became friendly as we discussed wine, the types of wines we like and the experience we had in South Africa so far.

Barry recommended a few wines to us, including the Meerlust Rubicon (2007 vintage), which we ordered.  It was a very pleasant red, and went well with our meals.

The service we experienced at City Grill on our first night was excellent, and the passion exhibited by Barry, as well as the personal service he gave us, made us want to return.

After a very nice meal accompanied by an excellent bottle of red, we headed home, catching a taxi back to Green Point.

And so concluded our first day in Cape Town.  It was a complete sensory change of everything: pace, scenery, sights, smells, tastes, experiences and moods.

Stay tuned for our seventh day in Africa, and our second day in Cape Town.