It has been a while since I posted an article on post-processing, and having discovered a new, effective and pleasing technique just last month, now is a good time to discuss my learning and show my results.

Hopefully readers will find value in what I am about to present, both in words and images.

HDR (high dynamic range) processing has been a large part of my workflow since my initial foray into this technique in January of 2011.  The results I achieved with my first HDR image seriously impressed me, and I have been using HDR imaging techniques ever since.

The software I use for HDR processing is HDRsoft's Photomatix Pro, which is one of the more common and more popular HDR imaging packages available.

Photomatix Pro has unfortunately attracted some negative attention due to some of the very garish results it can produce.  Such is its pervasiveness that many over-processed, intensely-saturated, halo-laden, noisy, illustration-like images have been described as having the 'Photomatix look'.

This look does not at all appeal to me, and with restraint and sensible choices, I have found that Photomatix Pro can produce very photo-realistic results; and in all of my HDR images since, I have aimed to produce such results, and avoid the over-processed look that so many before me and after me have either set out to achieve, or accidentally achieved through a lack of restraint and judgement.

I find HDR processing most effective for interior images (such as cathedrals) where the dynamic range is very broad; such environments have bright highlights from windows, and very dark shadows.  This range of light levels is too much for even the most expensive camera in the world to capture, so HDR processing is a very effective way to reproduce what you can see when you are standing inside such an environment.

While I use HDR processing almost exclusively for interior architecture images, I have also found it effective in landscape, cityscape, seascape and even still life and macro images.

My interest lies in achieveing a very photo-realistic result which shows what the human eye can see, but what the camera can never adequately capture.

To achieve this objective, I typically shoot between five and nine exposures, each a stop apart.  Once I have metered and determined the 'correct' exposure, I dial in up to four stops of over-exposure and work my way back to four stops of under-exposure.  This gives me nine images with which to work, capturing details from the deepest shadows and the brightest highlights.

My post-processing workflow is summarised as follows:

Astute readers might wonder why I choose to work from JPGs at the HDR processing phase.  In short, the raw converter in Photomatix Pro does a bad job (in my opinion and experience), and the high-quality JPGs produce a much nicer result.  See my earlier article HDR Generation: Raw or JPG? for a more detailed and visual explanation.

In choosing one of Photomatix Pro's tone-mapping presets, I find that the 'Natural' preset produces the most realistic results, and 99% of the time, it just works well.  Of course, the nature of the subject and dynamic range can affect the ability of the preset to produce the desired results, but as a general rule, the 'Natural' preset works best.  I have dabbled with a few others, but most of the presets are garish and unrealistic, so I avoid them.

During a recent trip to England, whilst processing my images, I discovered a new way of producing photo-realistic results with extra 'pop'.

Rather than using just one Photomatix Pro tone-mapping preset, I performed the HDR processing twice, using two different presets.  The first was the 'Natural' preset, and the second was either the 'Enhanced' preset or the 'Creative' preset.

In Photoshop, I then blended the two HDR composite images together, taking the best from each.

Now, the 'Enhanced' and 'Creative' presets can and do produce some very garish, unrealistic and unappealing results; but when one takes only the 'good' parts from the image, and blends them with the more subdued and realistic results of the 'Natural' preset, the resulting image has extra 'pop'.

The best way to illustrate this is with two actual images. I will show:

Let us first look at one of my images of Ely Cathedral.

The capture phase consisted of nine exposures, from -4EV to +4EV.

This is what Photomatix Pro produced, using the 'Natural' preset: 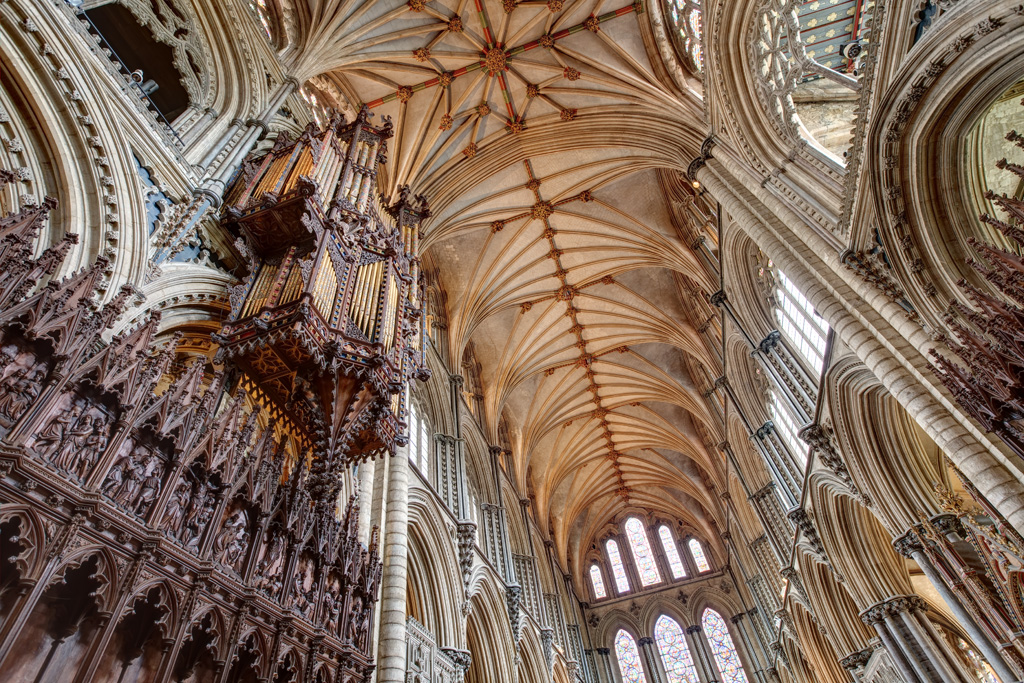 Now, this looks nice and realistic, and contains lots of rich details throughout, but to my eyes it is too bright and tonally flat.  Granted, at this stage the image has not been darkened or had contrast applied, but despite that, it summarily lacks the ambience and atmosphere that I saw with my own eyes when I was standing there.

I then processed the nine exposures in Photomatix Pro again, but this time I used the 'Enhanced' preset.  This was the result: 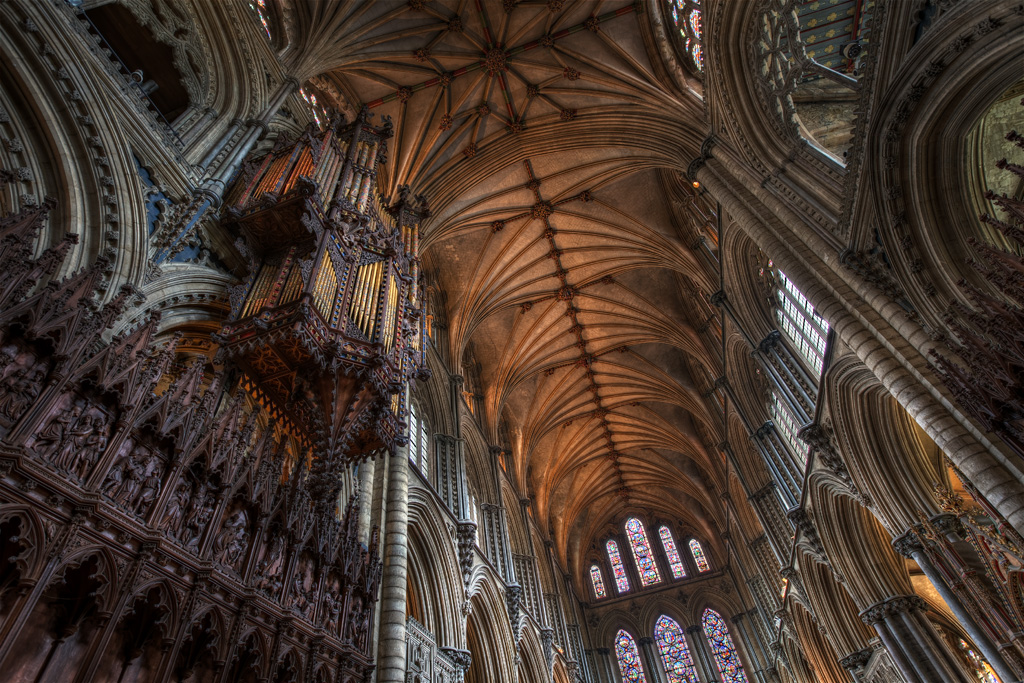 This version of the image has more 'pop', but it is bordering on the over-done side of HDR processing.  Like the first version, the image is flat, but that is normal for HDR composites, unless you tinker with contrast in Photomatix Pro, which I do not do.

I like the tonality of this image more than the first version.  There is a darker overall feel, which is reminiscent of the actual cathedral, and there is more contrast and tone in the architecture.  However, it looks 'HDR-ish' (particularly in the ceiling), and not as realistic as I would like.

This was the result of that experiment: 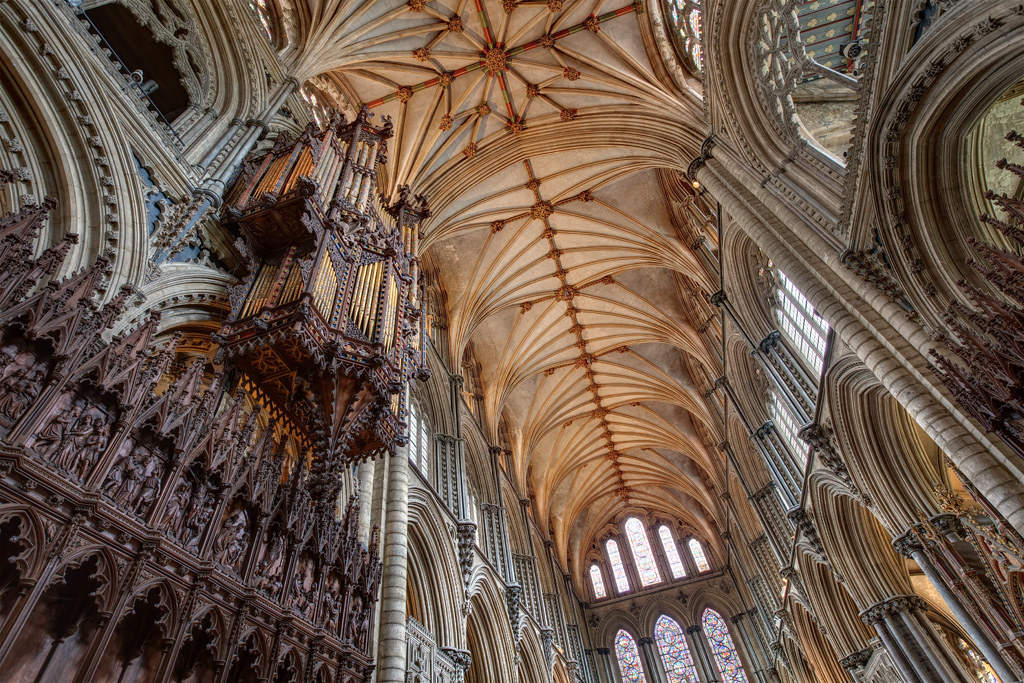 By brushing in the 'Enhanced' version at 50% opacity, I was able to infuse some of that more over-done look without actually over-doing it; the detail was there, but the HDR look was not.

Doing so gave me the extra tonality, darkness and detail enhancements I wanted in specific areas (especially the woodwork and the columns), but preserved the more realistic ceiling in the 'Natural' version.

In my workflow, the blending of the two HDR composite images was the very last step.  There was basic processing to be done first.

Here is the final image, after all processing was completed: 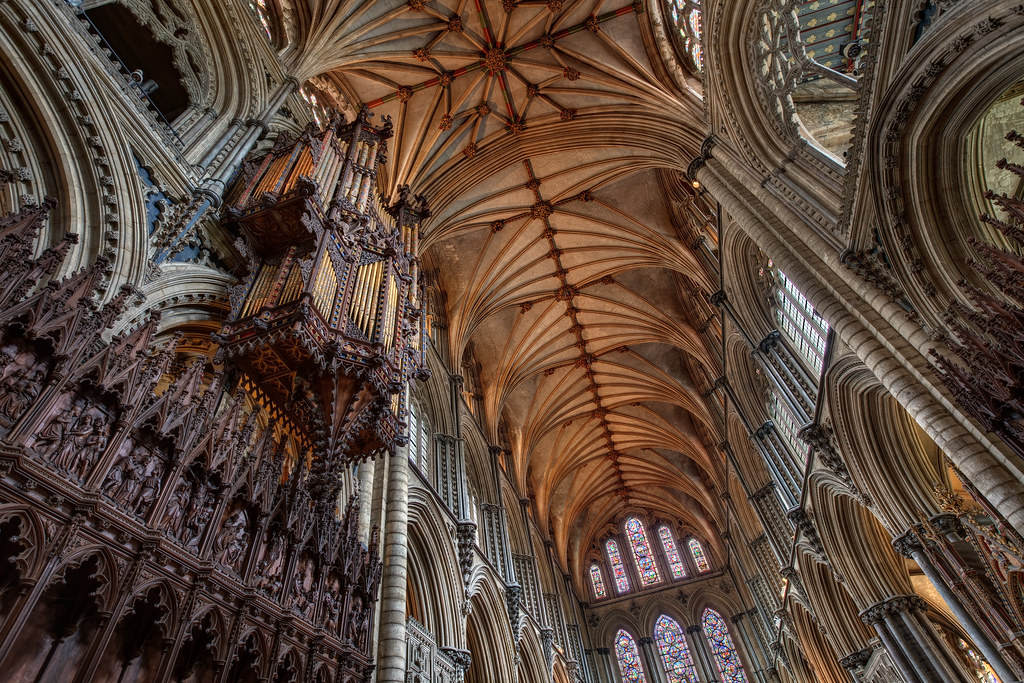 The Organ and the Nave of Ely Cathedral

There was a fair bit of extra processing involved, most of it being standard practice for my HDR images.

The first step was to bring back the details and the colours in the stained glass windows in the distance.  To do so, I added one of the darker JPGs as a separate layer, added a black layer mask, carefully selected the stained glass, and brushed in the details using a soft white brush at varying levels of opacity, depending where more aggressive or subdued blending was required.

The next step was a contrast boost.  I added a Levels adjustment layer, in which I marginally increased the blacks and marginally decreased the whites to add a global boost of contrast.

The next step was to apply some selective darkening, which I achieved by adding a new layer, changing the blend mode to 'Soft Light', and brushing in the desired darkness with a soft black brush at 20% opacity.  This is my usual technique for darkening, and sometimes I use multiple layers.

After darkening certain areas, I felt that the areas underneath the organ needed some subtle lightening.  I added the same type of layer as in the previous step, but used a white brush to lighten those areas.

The next step was to merge all of the previous layers, and add some Unsharp Mask to increase the contrast, as well as the Smart Sharpen filter for detail sharpening.

The final step was the blending the 'Enhanced' composite with the 'Natural' composite, on top of all of the above processing.

And that concluded the processing of this image.

Let us look at another image, this time an exterior night shot, where I found that details from two different HDR composites together made for a better image.

I captured a twilight image of London's iconic Elizabeth Tower (colloquially, but incorrectly called Big Ben - Big Ben is actually the bell inside the tower) on our last night in London.

Like most of my images, I bracketed exposures, and decided to use HDR processing to bring out more detail than a single exposure would yield.  For this image, I used only three images, as twilight light is not so punishing as far as dynamic range is concerned.

Here is the result of the 'Natural' preset in Photomatix Pro: 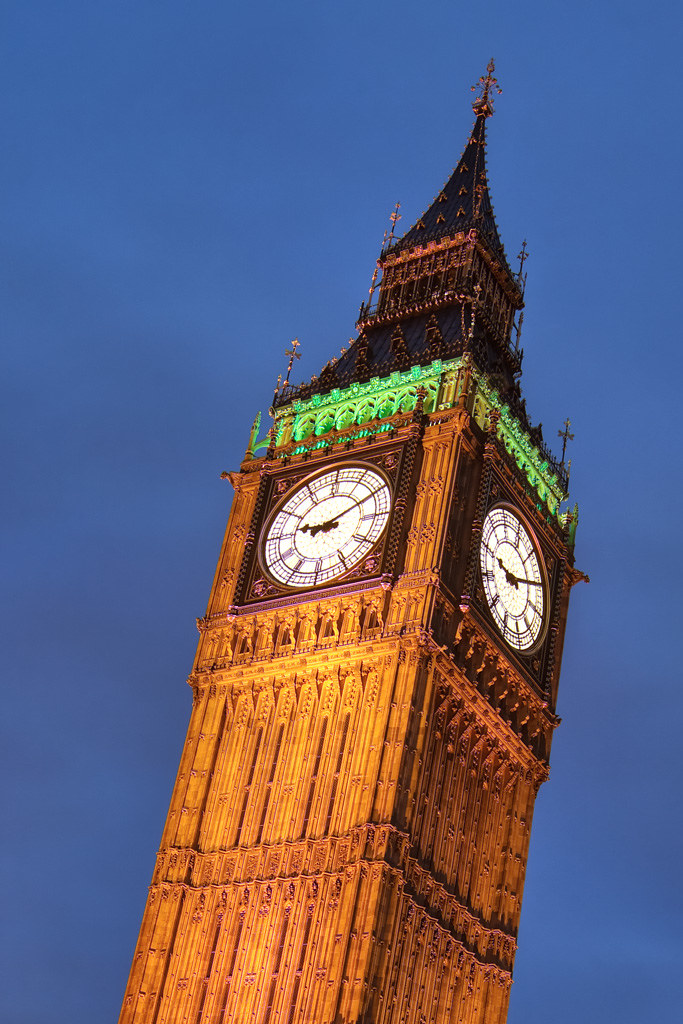 In this HDR composite, there is lots of detail, and the detail in the clock face in particular can be clearly seen; however, the image looks flat, and the architecture of the tower itself looks very yellow and lacks again what I call 'pop'.

I then decided to try another HDR merge, this time using Photomatix Pro's 'Creative' preset.  This was the result: 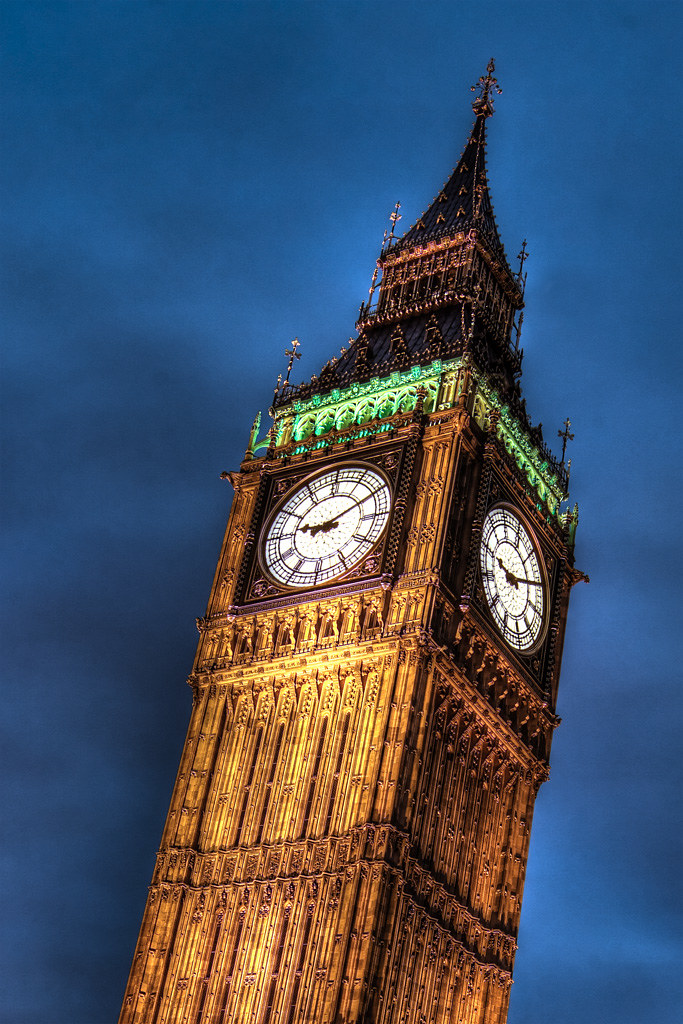 I can mentally hear you exclaiming "Eeeeeewwww!".  Yes, so did I.  In this case, the 'Creative' preset most certainly went over the top, and introduced some very displeasing and cringe-worthy artefacts.  There is too much contrast in the sky, there is a nasty halo around parts of the tower, and there is a lot of noise in the sky.

However, of interest to me in this image is the less garish appearance of the tower.  It contains loads of contrast, but is not such a flat, yellow expanse; and, most appealing of all, it contains the appearance of gold rather than the horrid yellow cast produced by sodium vapour lights.

It is just a little too much, though, so let us see what happens when we take the sky from the first HDR composite, and subtly blend the tower details from the second HDR composite.  Here is the result: 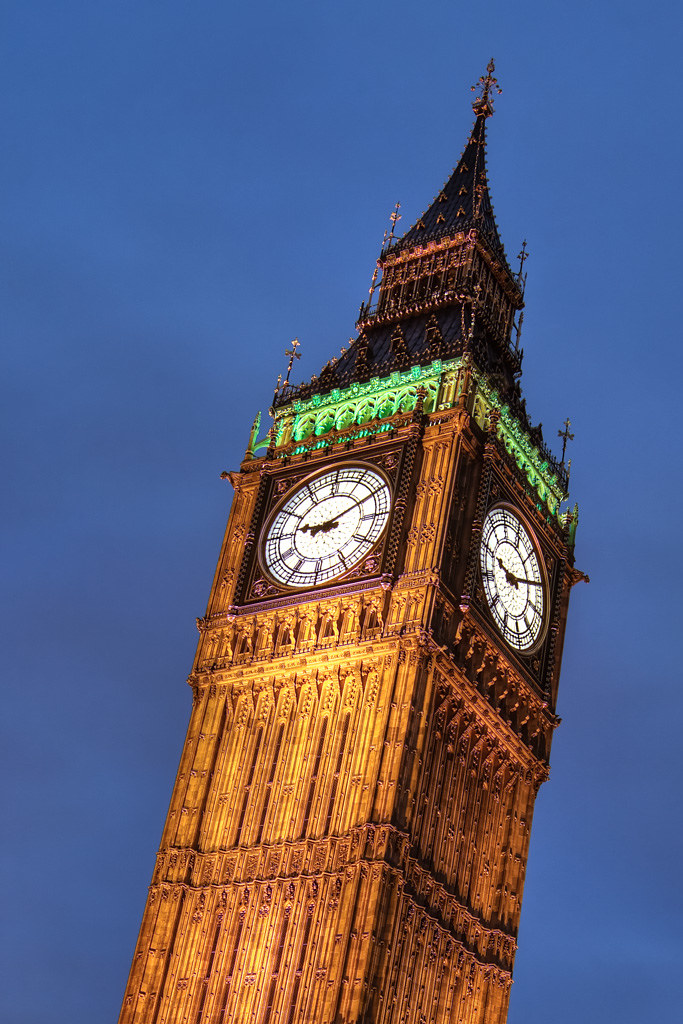 This is much more pleasing and realistic to my eyes.  The garish sky has been omitted, and the more metallic, golden, detail-rich architecture of the tower has been preserved.

I cloned out some dust blobs and flare, added a Curves adjustment layer with the 'Linear Contrast' preset, darkened the sky, merged the layers and applied Unsharp Mask and Smart Sharpen for the final image.  Here is the result: 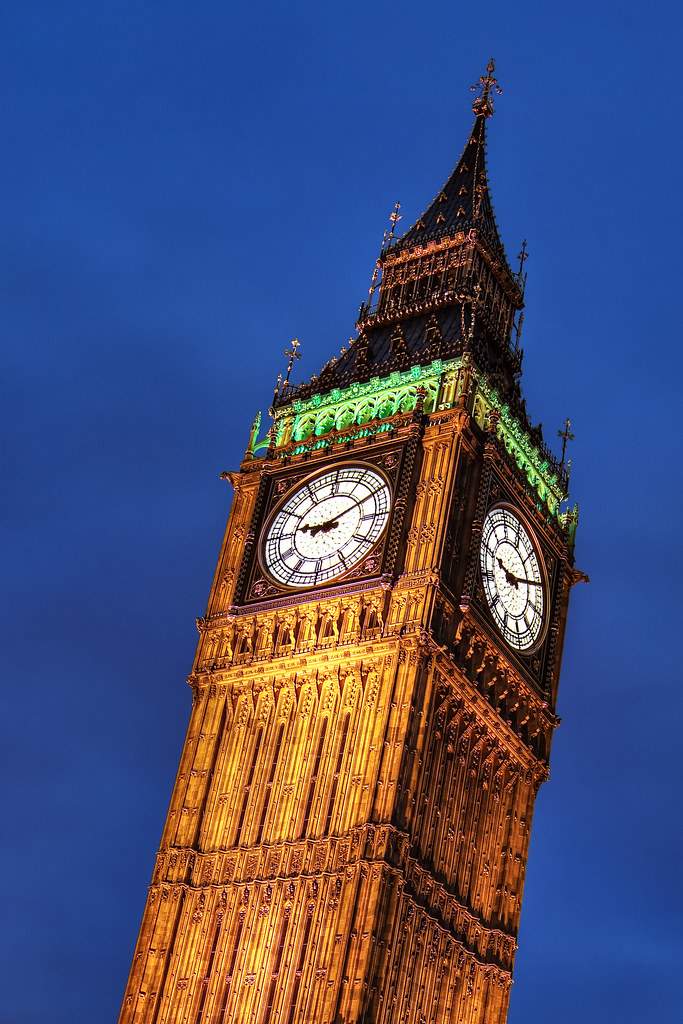 So, as can be seen by my images above, I have found a new way to produce richer HDR images using a combination of tone-mapping presets from Photomatix Pro, and restrained digital blending to take the best of both images for a stronger final result.

I hope that readers found value in this lengthy article, and also find inspiration to experiment with my new approach to HDR processing in their own photography.